Buddha Is As Buddha Does

By Lama Surya Das
A solid and substantive presentation of the ten transformative practices behind the Bodhsattva path of compassion.

"Bodhisattvas are individuals who exhibit an unusually strong and instinctive tendency to relinquish their own apparent gain and self-interest in order to help others, even if it requires a great deal of effort or abandonment of their own personal agenda," writes Lama Surya Das, founder and spiritual director of the Dzogchen Foundation in Massachusetts and California and author of books including Awakening the Buddha Within: Tibetan Wisdom for the Modern World. He is one of our Living Spiritual Teachers. The author has great respect for Bodhisattvas and he includes in his pantheon of these extraordinary individuals Mother Teresa, Martin Luther King, Jr., Dag Hammarskjold, Albert Schweitzer, Nelson Mandela, the Dalai Lama, Dorothy Day, and others. In Buddhist tradition, Bodhisattvas cultivate a noble heart and mind by following the ten transformative practices known in Sanskrit as the paramitas, generally translated into English as the " perfections" or the "transcendental virtues." They are:

These virtues are echoed in the religious, philosophical, and moral codes of conduct put forth throughout history including the Ten Commandments of the Jewish and Christian faiths, the seven cardinal virtues of Roman Catholicism, the ethical emphasis of Confucius, the stations of Islam, and the honor codes of the Boy Scouts and the Girl Scouts. According to Lama Surya Das, Shantideva, the "Peace Maker" of ancient India, stated that all the suffering and pain in the world stems from self-clinging and egotistical attachment and all happiness comes from thinking unselfishly of the well-being of others.

In his discussion of these ten transformative practices the author puts on display an amazing array of teaching stories, personal anecdotes, thoughtful quotations, and engaging lists. We were impressed with the chapter on generosity, the teaching story of "The Dervish in the Ditch," the quotes and comments by the Dalai Lama, the comments on the challenges and the obstacles in trying to practice patience in a speeded-up society, the six steps to anger management, the list of the seven Aya wealths, the eight qualities that limit one's potential, and the fierceness of trying to bring about justice in a violent world. Buddha Is As Buddha Does is a solid and substantive work by Lama Surya Das on the compassionate way. 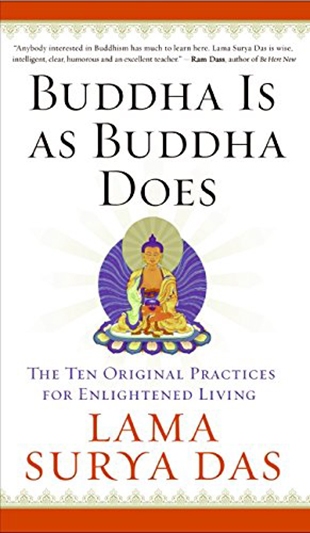