One City A Declaration of Interdependence

By Ethan Nichtern
A rich and multidimensional presentation of interdependence as an important Buddhist spiritual practice.

Ethan Nichtern is the founder of The Interdependence Project, a grassroots movement bringing the principles of meditation and interconnectedness to the arts and activism. A student of Sakyong Mipham, he regularly leads meditation groups in New York City and around North America. He is the host of the popular podcast "21st Century Buddhism."

Nichtern begins this book with a very entertaining explanation of a day in his life during which he takes note of his reliance on others and "the network of mutuality" which Dr. Martin Luther King, Jr., saw as animating our days and deeds. Buddhism makes a good case for interdependence; everything is woven together.

Nichtern examines five levels of interdependence: of the self, in relationships, in communities, in society, and universally. He goes on to discuss the six paramitas (meditation, generosity, discipline, nonviolence, exertion, and wisdom) as tools to facilitate the connections in our lives. He has some very creative and wise observations about multitasking, infotainment, consumerism, the media, the Internet, Compassion Deficit Disorder, and the role of violence in our private lives. Here's a sampler of his thoughts:

• "I've become the worst kind of consumer — a consumer of unmeetable expectations."

• "Likewise, if you traced the effects of one of your simple daily actions, you might be overwhelmed by the complexity of all the ripples you create. If you buy bottled water instead of using a refillable water bottle, you are raising the CO2 level above Greenland and affecting the livelihood of oil workers in Nigeria."

• "Instead of serving as a constant reminder of interdependence, however, a day of life in a big city is often spent maintaining caustic boundaries, yelling into cell-phones, averting our eyes from each other and holding our noses."

• "That might be the best five-syllable mantra ever: one thing at a time."

• "Interdependence is about the little things you do. It's not just what you produce, but how you treat the people around you, who labor with you. And there is always something we can do that is positive — ALWAYS."

We appreciated Nichtern's emphasis on spiritual practices in the city organized around love and interdependence. Here is a simple but practical one:

"I pick up and dispose of three pieces of garbage that I did not create each time I go outside. Of course, this doesn't make NYC much cleaner. But it does cause me to slow down for a moment, to become aware of my concrete surroundings, and to apply mindfulness to a specific task. Most importantly, it gives me the opportunity to engage with the awkward emotions that arise in my mind from having to bend over and pick up a candy wrapper in front of others on a crowded street. This practice adds about four seconds to my commute." 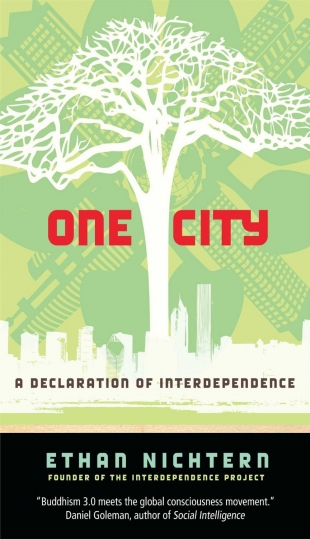