By Carlo Carretto, Robert Ellsberg
A gathering of the writings of Carlo Carretto, a Little Brother of Jesus who modeled a spirituality blending contemplation and social action.

Carlo Carretto (1910 - 1988) was a member of the Little Brothers of Jesus, an order inspired by the spirituality of Charles de Foucauld. He was born in northern Italy and wanted to become a teacher. But his plans were upended by the rise of fascism in his country, and he joined Catholic Action, a movement that aimed to mobilize the laity in promoting the religious and social message of the church.

Carreto spent 20 years working with this organization and then in 1954, decided to become a member of the Little Brothers of Jesus, a community of desert contemplatives. He led a contemplative life and served others in the spirit of Charles de Foucauld and Francis of Assisi. He lived in the Saharan desert of Algeria for 10 years and 20 years later wrote Letters from the Desert. It became very popular, especially with those who yearned for a new kind of contemplative life in the world. He went on to publish a dozen other books.

Robert Ellsberg serves as editor of this volume in the Modern Spiritual Masters Series. He has selected passages from Carretto's writings that demonstrate his life and work and interests. There are chapters on The Wisdom of the Desert, God Is Love, The Church of Sinners, A Brother to All, Prayer, and Last Things. We were quite impressed by his thoughts on carrying others in prayer, the importance of contemplation in the streets, the God within, and the many manifestations of resurrection in the world. In his introduction to the paperback, Ellsberg states:

"Carlo Carretto represented an ascetic, yet joy-filled spirituality available to lay people, even in the midst of pressing obligations, even amid the din of city noise, even in the midst of poverty and suffering. He showed that a life of prayer need not — indeed must not — relieve us of a passion for social justice and a spirit of solidarity with the least of our brothers and sisters. At the same time he reminded social activists that in the midst of their good works they must preserve a place of stillness, a place where they can listen to the word of God and find renewal." 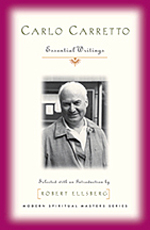