Breaking the Drought Visions of Grace

By Stephen Levine
A collection of 81 spiritual poems.

Stephen Levine is the bestselling author of many books including A Year to Live and Unattended Sorrow. His guided meditations have been used by many on journeys of self-discovery. What people may not know is that he wrote a book of poetry that was published in 1959. He returns to this form of communication after many years. The 81 poems in this paperback are divided into sections on:

• Breaking the Drought: A Reawakening
• The Earth in Meditation
• Devotion in the Air Element
• Dying Into Life and Death
• Basho and Friends

Those familiar with Levine's books on grief, dying, and meditation will recognize themes often connected with these subjects in these poems. Indeed, Levine says in the introduction that the poetic sensibilities evident in his early poems "had gone into the intuitions so helpful in tuning into patients in a time of difficulty." But after too long, he's back to writing poems, and we are grateful.

Noting another kind of drought, a lack of rain for eight years in the Southwest where Levine lives, he writes: "Droughts can make you superstitious, / changing the way you pray / and to whom." When rain does come, he grounds it in recognizable detail: "It began to rain the day our dog died / and it has rained for two months since, / She would have wanted it this way / she was frightened by thunder."

Spiritual truths pepper these poems. In "Millennium blessing," he advises, "There is a grace approaching / that we shun as much as death, / it is the completion of our birth / . . . It is an insistent grace that draws us / to the edge and beckons us surrender / safe territory and enter our enormity. / . . . And there is nothing left to say / but we are That." In another poem, he describes the journey: "I become smaller and smaller; disappearing, / people trip over me, my ego is enormous. / But love brings me down gives me shape / allows me to begin again and again."

Some of our favorites here are poems about love, a subject Levine approaches from many angles. Here is one sample:

If discourse would do it
I'd be sitting with His Holiness
every moment he has free.

If contemplation would do it
I'd have translated the Periodic Table
to hermit poems, converting
matter to spirit.

If even fighting would do it
I'd already be a blackbelt.

If anything other than love could do it
I've done it already
and left the hardest for last." 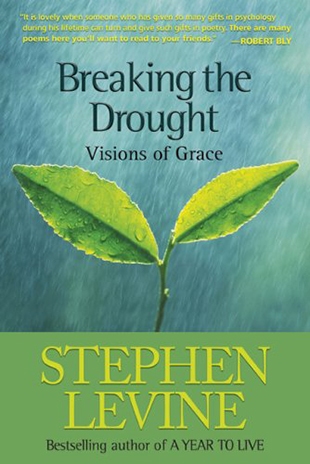