By Eboo Patel
A fascinating memoir about the founder of an interfaith youth movement that combines pluralism with compassionate service.

A memoir recommended for those who are interested in religions working together on such common practices as love, compassion, service, and justice.

Eboo Patel is the founder and executive director of the Interfaith Youth Core, an international nonprofit that is building an interfaith youth movement. This American Muslim of Indian descent has written a fascinating and timely memoir about his calling to educate a new generation to the values of religious tolerance and service to all humanity. In the introduction he notes that statistics are in favor of this work because the populations of the most religiously volatile areas of the world are strikingly young: 75% of India's one billion are not yet 25; 85% of people who live in the Palestinian territories are under 33; more than two-thirds of the people of Iran are under 30; and the median age in Iraq is 19 1/2. Trouble is, religious extremists of all stripes are opening schools and programs to indoctrinate these youth in acts of violence. Patel makes it clear that those committed to pluralism, toleration of all religions, and compassionate service must rise to the occasion and speak with creativity and poignancy to the young and the restless. He notes:

"Religious pluralism is neither mere coexistence nor forced consensus. It is a form of proactive cooperation that affirms the identity of the constituent communities while emphasizing that the well-being of each and all depends on the health of the whole. It is the belief that the common good is best served when each community has a chance to make its unique contribution."

Patel describes his upbringing in Chicago as an Ismaili Muslim, his debt of gratitude to an inspiring teacher, his experiences with the YMCA, and his dating a Mormon girl. His interest in the Catholic Workers and other forms of volunteering came while attending the University of Illinois. Patel was friends with Wayne Teasdale, a pioneer in the development of an interfaith movement wedded to environmental action and freeing Tibet. Early on, Teasdale told the author that he could play a leadership role in the global interfaith youth movement.

Patel's other adventures in this burgeoning new field of human endeavor include his experiences with the United Religious Initiative's Global Summit, his trip to India where he becomes more familiar with his family's commitment to the service ethic, a visit with the Dalai Lama, his becoming a Rhodes Scholar, his participation in the Parliament of World Religions in 1999, and the founding in the same year of the Interfaith Youth Core, emphasizing intercultural encounter, social action, and interfaith reflection.

Patel ponders the relationship between religion and violence and comes to a fresh appreciation of his Muslim faith and its defining moments, the Treaty of Hudaybiyah and the peaceful return of Muhammad to Mecca. We think that Patel is on the right track with his inspiring vision of religions working together on common practices such as love, compassion, hospitality, and justice. It is also worth noting the excellent mentors who have informed his muscular faith; among them are Gandhi, Martin Luther King, Jr., Dorothy Day, and James Baldwin. After reading this memoir, you may want to learn more about the Interfaith Youth Core. Check out their website and also the resources listed in Patel's bibliographic essay at the end of the book. 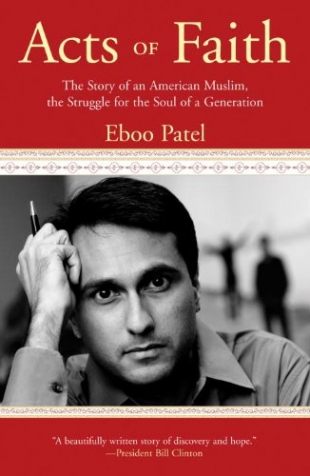