By Thomas Moore
The bestselling writer's advice on how to dig deeper and discover the soulful meanings of your life's work.

When people are asked for words to describe their jobs, the ones that repeatedly come up are "stressful," "difficult," "discouraging," and "frustrating." No wonder many think of work as a problem, a challenge, or even a war zone. More than 1,000 Americans lose their jobs every hour, and people are now realizing that over the course of a lifetime, they will most likely have many different jobs. Change is the name of the game, and it takes plenty of flexibility and patience to stay in that game.

Thomas Moore published his bestseller Care of the Soul in 1992 and described it as a "program for bringing soul back into life " He had rightly taken the pulse of those times and found that "loss of soul" was the primary cause of the restlessness, addiction, insecurity, and disappointment of so many men and women. Moore presented a recipe for soulful living that was rich, deep, and appealing. He helped us see that we can learn from all our troubles, tragedies, and follies and that soul can never be separated from body, family, work, love, and power. In the end, Moore called us to care for the world's soul and to celebrate the sacred arts of life.

In A Life at Work the author is still focused on the sacred art of soulful living. This adventuresome book is right in sync with our times when people are being forced by circumstances beyond their control and the exigencies of the marketplace to look at the big picture. Moore is concerned with our life at work as it reveals the unfolding of the meaning of our entire life. It is here that we make the choices that determine our destiny:

"A life work is like a peacock's tail: It has many facets. As you go from one job to another, you begin to see who you are and what you might do with your life. All the jobs may contribute to that realization and therefore play a significant role. Even the dead-end jobs, the ones you suffered through, the ones that seemed to go nowhere — all of them may be redeemed at some future point when it is revealed to you what you are meant to do."

Moore delineates the various colors in the peacock's tail as he discusses the calling, the movements of soul and spirit, reconciling with the past, making the most of the creative potential of chaos, feeling stuck in success, care of the soul at work, being grounded and flying high, and the daimon of work. He includes illustrative material from the lives of others and colorful observations from his own work as a monk, a teacher, a musician, a therapist, and a writer.

One of the high points of the book for us is a teaching story about a man who goes through life following the orders of an angel who moves him from one job to another until by the end of his life, he has become a holy man:

"Mahud was a simple man who lived in a small village and made his living by selling vegetables at a busy market. He was comfortable enough and liked his work. But one day the angel Khabir appeared to him and told him to jump in the river. Without thinking about it, Mahud leaped into the flowing water.

"He was carried downstream until a man on shore threw him a rope and pulled him out. The man offered Mahud a job in his fishing business and a small room where he could live. Mahud appreciated the man's kindness and took the job and worked at it, rather happily, for three years. Then Khabir appeared to him once more and told him to move on.

"Mahud obeyed immediately and walked from village to village until in one place a man offered him a job in his fabric shop. This was new to Mahud, but he took the job and learned the trade and worked there relatively happily until the angel appeared again and sent him on. Mahud worked at odd jobs for years in this manner, always moving along when the angel instructed.

"When Mahud was an old man, he had gained the reputation of a holy man. People began coming to him with their illnesses and worries begging him for cure and counsel. One day a visitor to his village asked him, 'Mahud, how did you get to where you are now?'

"Mahud thought for a moment and said, 'It's difficult to say.' "

"It's difficult to say because Mahud's only talent was his openness to the directives coming from the angel whose name means 'the All Aware.' Mahud had the precious ability to recognize the call to move on and the openness of heart to follow it.

"This is a story about calling and obedience to the call. But let's remember that at root obedience means 'listening.' To find your way you have to pay close attention to the signs about when to change your job, when to get unstuck and reenter the flow of life, and when to retire to a life of healing and teaching."

Moore wants us to identify with Mahud whose heart is open to change. Throughout the book, we are advised to pay close attention to what is happening in our lives — through our memories, our bad habits, our failures, our dreams, and our desires. For those starting out on the path of a life at work, Moore recommends connecting with the source of your vitality. For those who have gone through many jobs and are feeling in a rut, he recommends diving deeper into the soul's depths: "A life work is the emergence of your unique self, worked through and manifested in the things that you do. . . . If you live from a deep place, your life will blossom like a flower." The author really connects with our innermost yearnings with chapters on loving what you do, to work is to pray, and aiming for a seamless life.

Usually when reading one of Moore's books, we encounter a few passages that make us want to stand up and cheer. Here one of those moments came in his section on mystery as a chief element of a spiritual life and his delineation of the role it plays at work. Often there is no rhyme or reason to the jobs we take or the passages we make. Our choices are mysteries, difficult to explain. But they all do add up. A good example is all the contributions to humanity that Jimmy Carter has made since he left the Presidency. "A life work," Moore reminds us, "may take an entire lifetime to show itself." 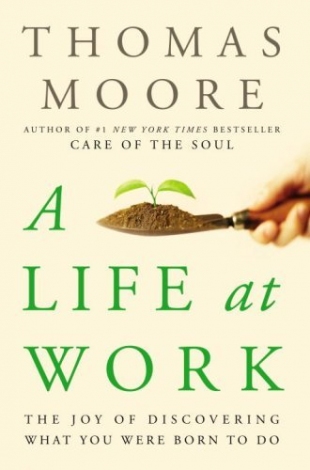