Love & Death My Journey through the Valley of the Shadow

By Forrest Church
A courageous and wise work about death and dying.

Forrest Church served for almost three decades as Senior Minister and is now Minister of Public Theology at All Souls Unitarian Universalist Church in New York City. He was educated at Stanford University, Harvard Divinity School, and Harvard University where he received his Ph. D. in church history. He has written or edited 23 books. On October 17, 2006, Church sent a letter to members of his congregation informing them that he had been diagnosed with a particularly virulent form of esophageal cancer. Then in February of 2008, he told members of his congregation that his cancer was terminal and that he had been told that he only had a few months to live.

In this courageous and wise work, Church recounts his "journey through the Valley of the Shadow." He was awakened to the shock of death with the sudden passing of his best friend when he was in college: "We cannot protect love from death. But by giving away our hearts, we can protect our lives from the death of love."

Church's most intimate encounter with death came with the death of his father Frank who served Idaho in the U.S. Senate for 24 years from 1957 to 1981. "Do you know why great men die so well?" his dad asked him one day. "Because they have to." Church recounts his introduction to the ministry at funerals and then shares lessons he has learned from dying parishioners. He also shares five short meditations on dying from his earlier books. There is a touching interpretation of the themes of love and death in the movie Titanic, a reflection on the deaths of Princess Diana and Mother Teresa, and a look back at the tragedy of 9/11. In his own battle with cancer and alcoholism, the author came up with a mantra that served him well:

"Want what you have.
Do what you can.
Be who you are."

Church is grateful to the mysteries that bracket our lives from birth to death. He has learned a lot from love's lessons. This education shines through in his suggestions on visiting a person in the hospital, his salute to the doctors and nurses who have cared for him, his belief in the holiness of tears and of laughter, his reflections on the death sentence and the sacrament of grief, his tribute to kindness as a pure virtue, and his conclusion that "the one thing that can never be taken from us, even in death, is the love we give away before we die. The purpose of life is to live in such a way that our lives will prove worth dying for." 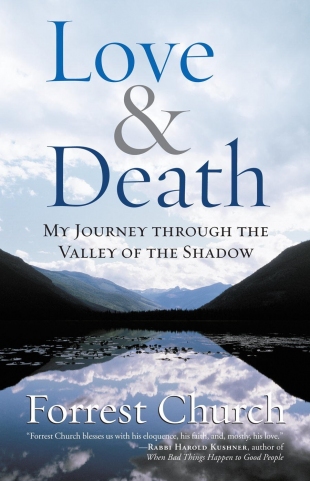