By Bud Heckman, Rori Picker Neiss
A handy resource on the growing interfaith movement filled with practical ideas and an abundance of resources.

If you are already interested in what we call interspirituality (it has many other names including ecumenism, interfaith dialogue, or multireligious dialogue), you are riding the wave of the future. The staff at the Ontario Consultants on Religious Tolerance have suggested that, if current trends continue, by as early as the year 2035, the majority of Americans will belong to non-Christian faiths. There are now as many as five million Muslims in the United States and Islam may well have surpassed Judaism as the second-largest religious tradition in the country. There are now more than a million Hindus, more than two million Buddhists, and nearly a half million Sikhs in the United States. Scholars are inventing new terms to deal with this religious diversity such as polyvalence and kaleidoculture.

Editors Bud Heckman, former executive director of Religions for Peace-USA, and Rori Pciker Neiss, former lead staff of Religions for Peace-USA, contend that in this heated-up multifaith world, we must become bilingual, speaking from our own faith perspective and able to dialogue with others as well. For starters, they offer some practical suggestions for those who want to get involved in the interfaith movement: subscribe to interfaith newsletters, open your door, learn by doing, host an informal dialogue, organize around an issue, tour houses of worship, share a meal together, start a book group, act it out, engage in social justice causes, hold a festival, celebrate music and the arts, facilitate reconciliation, and respond to hate, violence, and conflict with a public presence.

Heckman and Neiss offer guidance on how to achieve interfaith community through spoken dialogue, sharing of worship and prayer services, service projects, and advocacy. These sections are followed by a brief overview of the faith traditions with thumbnail sketches of the history, beliefs, and practices of some of the world's religions. This is followed by a directory of interreligious organizations and web-based information sites, helpful books to read, a listing of other resources (calendars, CD-ROM, etiquette guides, games, movies, posters, radio shows, and podcasts) and commentary on Leonard Swidler's "Dialogue Decalogue." 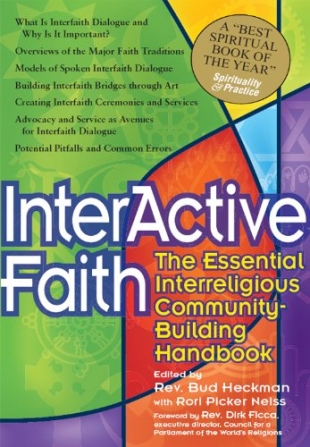