Finding Our Way Again The Return of the Ancient Practices

By Brian D. McLaren
A dramatic and adventuresome emergent form of everyday Christian spirituality based on seven ancient practices.

Brian McLaren is an internationally known speaker and the author of ten books on contemporary Christianity including Everything Must Change: Jesus, Global Crises, and a Revolution of Hope and The Secret Message of Jesus: Uncovering the Truth That Could Change Everything. This volume is the first in a collection which Thomas Nelson is calling The Ancient Practices Series; Phyllis Tickle is the series editor.

We are living in a time when many Christians are more interested in faith as a way of life than as a system of belief. A large number of those who have left the church have done so because a rigid set of ideas and rituals no longer has much relevance to their everyday lives. McLaren believes that faith as a way of life based on practices offers a viable alternative to a reductionistic secularism, a reactive and intransigent fundamentalism, and a vague, consumerist spirituality.

The author focuses on seven ancient practices: fixed-hour prayer, fasting, Sabbath, the sacred meal, pilgrimage, observance of sacred seasons, and giving. He is convinced that these activities can be called life practices or humane practices because they help us practice being alive, and humanely so. He lays out three reasons why we should pursue these practices: they help build character, they make us more alive and human, and they give us ways of experiencing God. After describing the Abrahamic practices which grew out of wilderness experiences, McLaren describes Jesus not as initiating a new religion but as proclaiming a new kingdom formed and transformed by spiritual practices. St. Paul follows with an emphasis on walking the path of love, viewing the faith as a process of "learning Christ" through training and exercise.

Today many Christians see the value in strengthening and deepening their faith through a wide variety of practices developed through the centuries and across traditions. McLaren calls this emerging spiritual formation movement a refreshing fusion of the old and the new:

"Old sectarian turf wars are giving way to a sharing of resources — heroes, practices, flavors, and styles of practice. And this, in a way, is itself a new practice, namely the sharing of previously proprietary practices. We might say that Christianity is beginning to go 'open source.' "

This exciting process has resulted in many people opening their lives to become sources of inspiration and encouragement for each other. McLaren notes that the spiritual life is less science than art, and like art it is learned through apprenticeship: "The most important things I've learned have come through a person who modeled a practice and then explained it to me, encouraged me to try it, and sometimes checked in later to see how I was doing." We are now entering a period when one of the aims of the Reformation is now being fulfilled: the open-source concept of the priesthood of all believers. The author asks us to imagine a form of Christianity in which people meet regularly in homes to share practices and intentionally take action to experiment with them during the week and then meet again to share stories and experiences. (We love this suggestion because this is exactly what some groups are doing using the Spiritual Literacy DVDs.)

McLaren compares spiritual practice to training to run a marathon, training to speak a language, and training to play an instrument. They all take regular habits and the ability to learn from mistakes. Modeling the process, he shares some of the lessons he picked up while on a fast.

McLaren commends the Christian tradition for its wide array of practices for those seeking to sustain the health and well-being of their souls. He assesses contemplative practices such as spiritual reading, prayer journaling, solitude and silence, gratitude, and many others. He salutes the importance of communal spiritual practices such as church going (a workout of the people) and delineates the different ingredients such as arrival, engagement, listening, response, and reentry practices. He ends with missional practices which equip the saints to live in love and serve others in the day-by-day world. Here are some of the missional practices: listening, speaking truth in love, not judging but showing mercy, giving to the poor, and showing empathy.

The churches that thrive and flourish are those that consist of disciples who are still on the way. Change, growth, and learning animate their focus on spiritual practices. McLaren ends the book with an examination of the ancient church's threefold path of katharsis (self-examination), fotosis (enlightenment), and theosis (unification of our being with God). He challenges us to use these ancient ways on the path of everyday spirituality where daily chores, the commute to work, the day at the office, a moment of refreshment outdoors, the welcome home kiss of our wife are all viewed as "seeing life with God" and "faithing our practices."

McLaren brings it all home with the image of St. Francis of Assisi standing before the sultan as a man of peace and a carrier of joy. It is time to share the resources and riches of the three great monotheisms — Judaism, Christianity, and Islam — and to open our hearts to the resurgence of spiritual practices from these religions that are the treasures of the world. 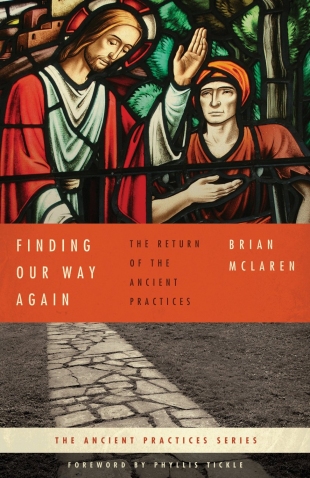