Put Down Your Sword Answering the Gospel Call to Creative Nonviolence

By John Dear
A multidimensional look at the Christian path of creative nonviolence.

John Dear, one of the Living Spiritual Teachers profiled at Spirituality & Practice, is an internationally known voice for peace and nonviolence. A Christian priest, pastor, and peacemaker, he has served as director of the Fellowship of Reconciliation, the largest interfaith peace organization in the United States. He has traveled to war zones around the world, been arrested 75 times for peace, led Nobel Peace Prize winners to Iraq, and given thousands of lectures on peace across the United States and the world. He writes a weekly column for the National Catholic Reporter and has written many books including A Persistent Peace: One Man's Struggle for a Nonviolent World.

In this thought-provoking paperback, Dear proclaims that Jesus was the greatest practitioner of nonviolence in the history of the world. Yet to this day many Christians do not take seriously his creative call to be peacemakers. The author offers his take on the Beatitudes, the nature of God, the mystery of the resurrection, and the common ground of interfaith nonviolence before moving on to accounts of his own protests against the Los Alamos Nuclear Weapons Laboratories, the School of the Americas, and the U.S. war on Iraq. These are followed by journals Dear kept on missions to Gandhi's India and war-torn Colombia.

But by far the best part of the book is the space Dear gives to the vision of peacemakers who have inspired and encouraged him to practice nonviolence as a way of life. He posits that one of the reasons the world is in such a terrible mess right now is our crisis of ethics and leadership. Instead of authentic visionaries who are working for greater disarmament, justice, and peace; we are stuck in a morass of poverty, greed, and permanent war. Here are some of those Dear salutes:

Many of these practitioners of nonviolence have withdrawn their cooperation from imperial America. Dear suggests the following:

"We can hold vigils, lobby, agitate, write, and speak out for peace. We can disturb the peace and demand disarmament and justice. Some can cross the line in acts of nonviolent civil disobedience to break the laws that legalize war, nuclear weapons, environmental destruction, and imperial America. But every one of us is needed. As Rosa Parks showed, every one of us can make a difference."

In an essay titled "The Wisdom of Thomas Merton," Dear reveals how this Trappist monk challenged us to become contemplatives, students, teachers, apostles, and prophets of Gospel nonviolence. Hopefully others will follow in this path and "try to transform the church and the world into the community of creative, loving nonviolence." 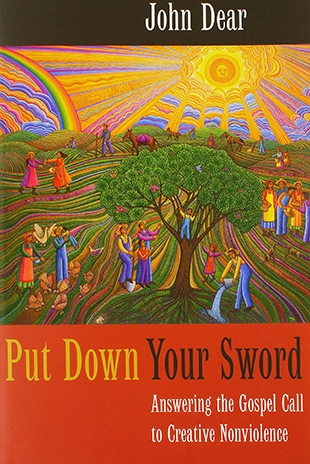