By Simon Beaufoy
The shooting script for the award-winning film plus an interview with director Danny Boyle and an article by screenplay writer Simon Beaufoy.

Simon Beaufoy is the screenplay writer of The Full Monty (1997) and Miss Pettigrew Lives for a Day (2008). In the foreword to this screenplay paperback from Newmarket Press, he shares his excitement in first reading Q & A by Vikas Swarup about Mumbai "a modern city that owed nothing to the past and was charging into the future at breakneck speed. The energy of the place, the sense of fifteen million people furiously on the make, was palpable from the rag pickers on the rubbish dumps to the film stars behind their high walls."

In his introduction, Danny Boyle, the director of Slumdog Millionaire, says of Beaufoy's screenplay:

"I read it on a gray London afternoon, and the script was literally vibrating in front of me. By page 10 — the scene where the two brothers are chased through the Jehu slums — I had made up my mind to direct the film. Here was a whole new world — dazzling, brutal, dynamic, and joyful — brought vividly and urgently to life."

Reading the shooting script, which is the heart of this paperback, is to be transported back to the adrenalin-pumping dynamism of the story which sweeps us from one part of India to another with startling vividness. The story is a multicultural masterwork, opening our eyes to people and places most of us have never seen before. The lead character, Jamal, who is played by three actors and ages from seven to 18, is a curious and a conscientious fellow who has learned many things from his struggle to stay alive on the streets. His destiny takes him to the "Who Wants to be a Millionaire" TV show where he might win 20 million rupees. But the real story is not the money or the fame or the torture he receives as a contestant but the love he sustains over the years for Latika.

Be sure to check out the color photo section and the complete cast and crew credits as well as the exclusive interview with director Danny Boyle. After reading this paperback, you will feel like dancing along with everyone responsible for the creation of Slumdog Millionaire! 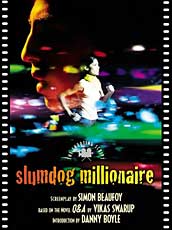