Red, White, and Muslim My Story of Belief

By Asma Gull Hasan
An autobiography with feisty insights into Islam and the many misconceptions people have about it.

A memoir recommended for those who want to clarify the misconceptions they have about Islam and understand why being Muslim makes the author a better American.

In her last lively book, Asma Gull Hasan called herself a "Muslim feminist cowgirl" referring to her years in Pueblo, Colorado. In this follow-up work that mixes autobiographical material with feisty insights into Islam and the many misconceptions people have about it, the author demonstrates the spiritual practice of enthusiasm which writer George Matthew Adams describes as "a kind of faith that has been set on fire." A first generation American, Hasan is proud of her Islamic heritage and those ancestors who might have been "great scholars, conquerors and philosophers." She points out that having a direct relationship with Allah is quite astonishing to her. There are no intermediaries or middlemen. She revels in the connection she feels with over a billion brothers and sisters around the world when she performs one of the five daily Islamic prayers. At the same time, she appreciates the diversity within the faith that enables the ceremonies for couples being married in Saudi Arabia and in Malaysia to differ widely although both are technically Muslim weddings.

Among some of the other seven reasons why Hasan is a Muslim are because Islam has a rich mystical tradition in Sufism, because Islam is a woman's religion (she explores Muhammad's love and respect for women and his preference for them over the company of men), because Islam allows and expects individuals to makes mistakes, and because being Muslim makes her a better American (both share a desire for social justice, gender equality, racial equality and property rights). Asma Hasan's ardor is dramatically conveyed on the pages of this fascinating book!

Note: This book was previously published as Why I Am a Muslim, and we chose it as one of the Best Spiritual Books of 2004. We’re covering in again in case people look for it by its new title. 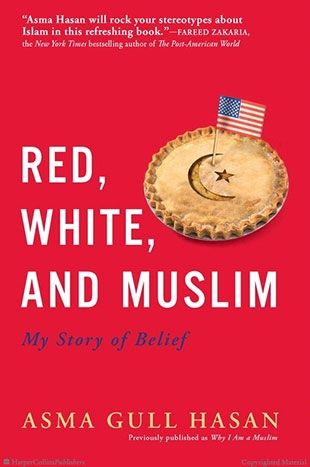