By Huston Smith, Jeffery Paine
An autobiography, one of the best books of the year, that describes a creative, visionary, edifying, and appealing spiritual adventure.

A memoir recommended for those who would like to be inspired by a creative visionary who practiced love and hospitality to all people and are open to wonder and practicing gratitude.

Huston Smith is the foremost authority on the world's religions and has spent a lifetime teaching, savoring, and practicing them. He was the focus of a five-part PBS television series with Bill Moyers and has taught at Washington University, the Massachusetts Institute of Technology, Syracuse University, and the University of California, Berkeley. The recipient of 12 honorary degrees, Smith has written 15 books, including his bestselling The World's Religions and Why Religion Matters.

In the foreword, Pico Iyer writes of Huston: "Many people can share a certain light with us, the fruits of their explorations, and in that very transmission there is a special beauty and value; but the ones who really move us are sharing with us their lives, showing us how the principles they elucidate play out in the here and now." Not a bad summary of what Huston Smith achieves in this creative, visionary, edifying, and appealing autobiography written with Jeffrey Paine.

Early on the author reveals the importance of spiritual practice in the start of the day: for the body (yoga), for the mind (reading a few pages from the Bible, the Bhagavad Gita, the Tao Te Ching, the Qur'an, or the Sufi poems of Rumi), for the Spirit (praying for others and for himself and concluding with the Jesus Prayer). He ends these activities with a review of the upcoming day and the intention that his actions occur in both dimensions — the historical and the vertical simultaneously.

Smith writes about growing up with missionary parents in China and reveals what he inherited from each of them: "I didn't learn Christianity in Sunday school; I drank it in with my mother's milk." Smith commends his father and mother for incarnating what William Blake cherished: "The most sublime act is to set another before you." In 1936, the author returned to America to attend college and then entered the University of Chicago' School of Divinity. He studied under Henry Wieman whose worldly understanding of Christianity had a large impact on Smith. He also married Wieman's daughter Kendra and claims that this was the best thing he ever did. He talks about his three daughters and the tragedies of his eldest daughter's death by cancer and the murder of his granddaughter.

Smith's many adventures are indeed laced with wonder. He describes encounters with the intellectual Gerald Heard, the polymath Aldous Huxley, the Hindu Swami Satprakashananda, His Holiness the Dalai Lama, the drug-experimenter Timothy Leary, the Native American Oren Lyons, modern magus Frithjof Schuon, and many others. He alludes to meditating with Buddhist monks in Burma, camping with aborigines in Australia, making a pilgrimage to Mount Athos in Greece, studying multiphonic chanting with Tibetan monks, and participating in holy Hindu festivals in India. Smith admits "I might adopt Will Rogers' famous bon mot thus: "I never met a religion I did not like." For ten years he practiced Hinduism, then ten years of Buddhism, and then ten more of Islam, but through it all he remained a Christian and regularly attended a Methodist church. In one of the best chapters, Smith celebrates these religions for their beauty, profundity, and truth.

Throughout his autobiography, Smith displays the radical hospitality which has been the source of his spiritual adventures and writing. There are wonderful pictures of many spiritual teachers as well as apt comments on their contributions to the large fund of wisdom in the world. We loved the answer he gives to the wrongs done by religions with a quotation by Sri Ramakrishna: "Religion is like a cow. It kicks. But it gives milk, too."

We were deeply moved by Smith's attitude and commentary on entering an assisted living facility at 90 years of age after spending 65 years in various houses with Kendra. He interprets this move as "no more than the turning of the page of a book." Smith sees his new mission as cheering up other residents of the place and holding them in his mind and thinking of ways to improve their day. "God, you are so good to me" has become his mantra. And he ends with a quotation from the martyr Saint John of Chrysostom, who while being drawn and quartered was said to have exclaimed. "Praise, praise for everything. Thanks, thanks for it all." 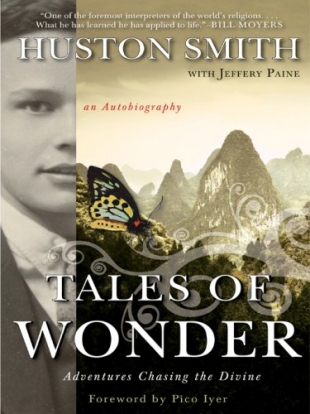