By Eduardo Galeano
Over six hundred illuminating vignettes about underdogs, losers, and the persecuted in the sweep of history over five thousand years.

Eduardo Galeano is a distinguished journalist and historian and one of Latin America's foremost writers. The winner of the first Lannan Foundation Cultural Freedom Prize in 1998, he is the author of Upside Down and Voices of Time, which were chosen by us for our Best Spiritual Books lists in 2000 and 2006.

With his usual prophetic fire and empathy for the underdog, the left out, and the persecuted, Galeano now gives us more than 600 vignettes covering the sweep of human history from the early civilizations of the Near East to the catastrophic wars and developments of the 20th century. The author insists that we remember the past and not lapse into amnesia or numbness given the pressing demands and speed of our present-day time-starved culture.

It is a pleasure to salute the heroism and courage of Harriet Tubman, the valor of Joan of Arc, and the creativity of Camille Claudel but these women are the exceptions in the long and torturous saga of chauvinism and misogyny. Galeano points to those who were executed as witches and seen as the property of men in one country after another. He writes:

"The Catholic Church still denies women the pulpit. The same fear drives fundamentalist Muslims to mutilate women's genitalia and cover their faces. And a sense of relief moves orthodox Jewish men to begin each day by whispering: 'Thanks be to God for not making me a woman.' "

Others who have suffered in the shadows are the landless peasants who helped construct the mighty pyramids of Egypt; the blacks from Africa who died by the thousands at sea and served whites for centuries; the immigrants who "are always on hand to take responsibility for unemployment, shrinking wages, crime, and other calamities"; the poor — "the ragamuffins for all bondage, the dead for all wars, the flesh for all prisons, the bargain-basement hands for all jobs"; and the children of the poor who are sold as disposable goods.

Galeano has little patience and no respect for various American Presidents including George Bush who trashed Iraq or William Howard Taft who said, "The whole hemisphere will be ours in fact as, by virtue of our superiority of race, it already is ours morally." or Harry S. Truman whose war-mongering is perfectly reflected in this vignette:

"The first bomb was tried out in the desert of New Mexico. The sky caught fire and Robert Oppenheimer, who led the tests, felt proud of a job well done.

"But three months after the explosions at Hiroshima and Nagasaki, Oppenheimer said to President Harry Truman: 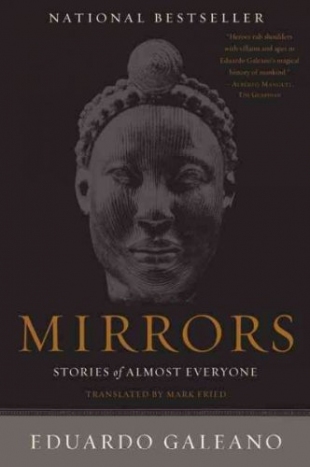