The Furious Longing of God

By Brennan Manning
A celebration of the love of God and the gift of grace in Christianity.

Brennan Manning is a recovering alcoholic and a former Franciscan priest whose spiritual path has led him down many different roads including teaching seminarians, speaking to large groups, living in a cave, working with the poor in Spain, and ministering to shrimpers in Alabama. He is the author of 15 books including The Importance of Being Foolish. In this brief but poignant work, Manning writes about a subject that has grabbed hold of him and not let go for 44 years : the miraculous love and grace of God for humankind.

The author calls the Creator's desire for us a "furious longing" and finds evidence of it in the Song of Songs 7:10: "I am my Beloved's and his desire is for me." Whether writing about his encounter with a dying woman in a New Orleans leper colony, pondering the prayers of Catherine of Sienna, or reflecting on the toxic impact on Christian believers of low self-esteem, guilt, shame and self-hatred, Manning makes a good case for the love which will not let us go. He has no trouble identifying with Don Quixote in the musical Man of La Mancha. Here love transforms his life and sets him on a new path. Manning ends with a celebration of grace ("the great and wondrous things that God dreamed of and achieved for us in Christ Jesus") and to "the ineffable Mystery" that surrounds this great gift. 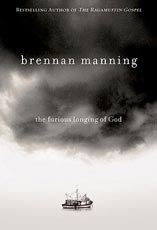