This Flowing Toward Me A Story of God Arriving in Strangers

By Marilyn Lacey
A sensitive and engaging memoir of a sister who has spent 25 years working with refugees and international immigrants.

A memoir recommended for those who want to observe the spiritual practice of hospitality toward displaced people and meet all people as guests in God's tent.

Marilyn Lacey has worked with refugees for the past 25 years, both in displaced persons camps in Africa and Asia, and as Director of Refugee Services with Catholic Charities in San Jose, California. In 2001, she was honored by His Holiness the Dalai Lama as an "Unsung Hero of Compassion" and has long been an advocate for refugees and migrants. She holds a M.S.W. from U.C. Berkeley (though she credits the refugees as her real teachers) , and in 2008 she founded the nonprofit Mercy Beyond Borders, whose mission is to partner with displaced women and children overseas in ways that help them move up from extreme poverty. Visit www.mercybeyondborders.org for more information.

Lacey begins her sensitive and engaging memoir with an account of how her motherhouse took in a Hmong mother and five children from Vietnam in 1980. After spending several weeks in a psych ward, their father joined them, giving Lacey a gift of his prized knife. The six weeks they spent there opened the author's eyes to a larger world. She then spent a year immersed in a Thailand refugee camp. One of the many things she learned was how important the spiritual practice of hospitality is to displaced people:

"It is our practice at Catholic Charities in San Jose to bring a welcome sign to the airport whenever we meet refugees arriving from camps overseas. Each sign has the refugee's name on it and, when possible, a welcome message written in the refugee's own language. This is not so the refugees will be able to find us, as if they were business travelers searching the crowd for a sign held by a waiting limo driver. Rather, it's because we want the new arrival's first moments in America to be positive.

"The refugees are generally the last persons to disembark from the airplane. Their faces, showing weariness imbedded by years of suffering and loss, peer out anxiously beyond the jetway into the boarding area of the airport. What awaits us at the end of this ramp? How will we manage without knowing the language? Will we have the strength to start over in a strange new place? What if no one is here to show us what to do next?"

All of us yearn to be welcomed by someone and to be made to feel at home. The Bible is filled with images of God as one whose hospitality signals both openness and love. As refugees grow accustomed to the fast-food culture, the consumerism, and the individualism of the United States, they need guidance and support as they struggle with culture shock and survivor's guilt (comparing their status to that of starving and suffering relatives back home). Lacey describes the many kinds of violence that have been inflicted on refugees and the excruciating pain caused by these nightmarish memories.

Lacey ends with a stirring image: "This, then, may be the world's only hope for peace: that all of us, friends and enemies, allies and foes, brothers and sisters and strangers alike, understand we meet as guests together in 'God's own tent.' . . . Each step in that direction moves our bruised and broken world closer to the day when mercy and justice shall kiss." 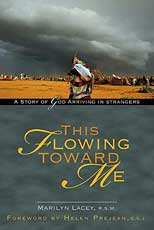