The Hope A Guide to Sacred Activism

By Andrew Harvey
A vision of the transformation of society brought about by Sacred Activists who wed mystical passion with radical change in the world.

On his 2005 DVD called Sacred Activism, mystical scholar and spiritual teacher Andrew Harvey outlined the lineaments of a new movement which has animated him to write this book and to found The Institute of Sacred Activism in Oak Park, Illinois, where he lives. In the introduction, he writes: "When the joy of compassionate service is married to a practical and pragmatic drive to transform all existing economic, social, and political institutions, a radical and potentially all-transforming holy force is born."

Harvey, who is featured on our website as one of our Living Spiritual Teachers, writes that his vision of Sacred Activism is grounded in three truths: he believes that we have yet to claim our birthright of Divine Consciousness and to open ourselves to the wellsprings of courage, generosity, and selfless service; that the best way to interpret the present day global crisis is to see it as "a crisis of birth" where the pain is but a sign of the deep changes to come in the ways we and our institutions operate; and that we need to take up the challenge of being passionate, caring, and nurturing midwives during these momentous times. As a teaser of things to come, Harvey opens with ten things we can do right now "to align yourself with the power and hope of Sacred Activism."

The author offers two stories about the love and wisdom power of Sacred Activism. He looks to the examples of Bede Griffiths, Nelson Mandela, the Dalai Lama, Martin Luther King, Jr., and others for inspiration in melding the mystic's passion for God with the activist's passion to bring about change. Harvey then presents what he calls "The Five Flames of the Sun of Hope" as a map to guide us on the journey to preserve and renew the planet. They are: The Nature of God, Humanity's Relationship with God, the Worldwide Mystical Renaissance, the Wisdom of the Dark Night, and the Sacred Power of the Divinized Sacred Activist. Anyone who moves toward the light is going to meet resistance, both inward and external. Harvey examines the five inner saboteurs that every Sacred Activist must face at one time or another: disbelief, denial, dread, disillusion, and the desire to cease to be.

Rumi once said: "In the ruin of heartbreak, you find the diamond of a divine passion that can resurrect the dead." This perspective informs Harvey's seven forces of Death and seven features of Birth in our world. (All of these were delineated in the author's DVD on Sacred Activism.) Part of our role as midwives bringing new life into being is incarnating the "Five Forms of Service," which include service to the Divine, to yourself as an instrument of the Divine, to all sentient beings in your life, to your local community, and to the global community. This is a rewarding path for the Sacred Activism, as Rumi has stated:

"To be born in love
Is to serve all beings and all creation.
Real lovers serve ardently, hopefully,
And in an ecstasy of awe."

In one of the best chapters in the book, Harvey outlines spiritual practices which can gird the Sacred Activist as he or she struggles with injustice, anger, indifference to corruption, and ethical disarray. He writes about the need for "cool practices" such as simple meditation, walking meditation, chanting, and saying the name of God peacefully in the heart as an antidote to self-righteousness, panic, or rage. Harvey sees "warm practices" such as Sufi heart practices, Hinayana Buddhist practices of Metta, lovingkindness to all beings, and passionate devotional chanting as measures to keep the heart open and pulsing with passion. He also salutes intercessory prayer, praying in a group, the sacred body practices (yoga, tai chi, and qi gong), sacred dance, tonglen, and more.

In the last section of the book, Harvey lays out what he calls the Seven Laws of Sacred Activism which include surrendering the fruits of action to the Divine, the alchemy of anger, joy, and recognizing evil (with three protection practices). In order to bring this sacred change to the world, the author envisions "Networks of Grace," organized around professions, passions, or what breaks our hearts. Here small cells of Sacred Activists can meet regularly and harness the energies of love, compassion, and justice. Harvey ends the book with a promise to produce a "Global Curriculum for Social Activists." 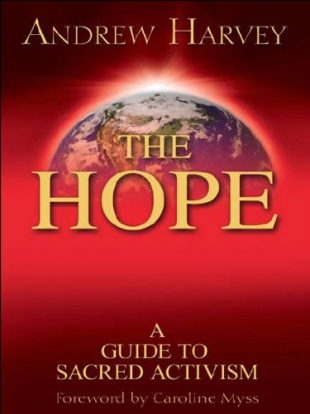