By Samir Selmanovic
An iconoclastic, prophetic, and enlightening work about the contemporary religious scene with its robust spirituality and interfaith experiments.

Samir Selmanovic is a founder and Christian co-leader of Faith House Manhattan, an interfaith "community of communities" that brings together forward-looking Christians, Muslims, Jews, atheists and others who seek to thrive interdependently. He is also the director of a Christian community called CityLights and serves on the Interfaith Relations commission of the National Council of Churches and speaks nationally and internationally.

This iconcoclastic, prophetic, and enlightening book charts his unusual spiritual journey while also offering startling insights into the contemporary religious scene. Selmanovic speaks with clarity and poignancy to traditional Christians, to activists in the interfaith movement, to believers in the emerging spiritual but not religious movement, and to seekers of all stripes. He covers an amazing amount of territory and, better than most, makes sense of the twists and turns of spirituality in this time of transitional change.

Selmanovic was raised in a culturally Muslim family in Croatia where the emphasis was on the pleasures of the senses and the challenges of keeping "one's honor account in good standing and growing." During obligatory service in the then-Yugoslavian army, he converted to Christianity and stunned his family and friends so deeply that he was forced to leave home. "My early Christian evangelical zeal did not help. I carried my Bible around with the confidence of someone who had just mastered the mysteries of life down to the last iota."

In 1990, Selmanovic came to the United States to study theology but was turned off by the self-serving nature of organized religion. "Religions were mirroring the cultures they were supposed to challenge. . . . . I signed up for a movement that was standing still, explorers who had already arrived, revolution that had given up." He eventually came to a position that he could live with. Instead of a constricted faith that posits answers in only a few places, he advocates celebrating a variety of "thin places" where God intersects with us. Instead of a Christianity that insists that it has the truth, he affirms the presence of God in many faiths. Instead of sacraments that are available only to true believers, he views them as channels of grace to all. His vision is open and comprehensive:

"We can either stay within the Christianity we have mastered with the Jesus we have domesticated, or we can leave Christianity as a destination, embrace Christianity as a way of life, and then journey to reality, where God is present and living in every person, every human community, and all creation."

The author shares his "theology of hemorrhoids" which calls for members of all organized religions to acknowledge their human limitations and stop in the futile and idolatrous activity of trying to constrict and manage God. He salutes the three monotheistic faiths for their "rich treasures of community, insight, art, organized action, and hard lessons" but notes that they have also "sanctified egotism, justified violence, and fomented hatred." It is time for monotheism to evolve, to widen the circles of inclusion, and to serve the world in the name of love. In the Seventh-day Adventist Church to which the author belongs, the people regularly re-enact the scene when Jesus washed the feet of his disciples. Selmanovic says: "A basin and a towel are, for me, the most potent symbols of Christian faith. They make me love God." It is time for monotheisms to give up the lie of supremacy and incarnate service of others.

There is a tradition within Judaism to continue creation through meaningful conversations, especially with those who disagree with us. The author is against both dissing and dismissing dialogue with atheists. He notes: "Atheists are our brothers and sisters, our partners and teachers, necessary and good, in a circle with Jews, Christians, Muslims, and people of other religions." Selmanovic has little patience with the scornful polemics of both religionists and anti-religionists who mirror each other in certainties which constrain spiritual growth.

The world has a surfeit of maps and too much emphasis on reaching a desired destination. "People are not looking for someone to show them how to escape life; they are looking for practicing sojourners and communities to help them walk the landscape of life." We live in a world where self-sufficiency is thought to be desirable, where lives are defined by rigid boundaries, and where we think that wars can be won. But that world is no longer. Selmanovic wants us to reflect on and act upon the realization that "to be is to belong to one another." He asks, "Can Judaism, Christianity, and Islam each be renewed to let God be the God of all humanity?" The first step may be a heart-felt understanding that we are one with the other and this itself is a blessing:

"The blessing given to me — being loved by God and having an opportunity to make a difference in the world — was not enough to keep my faith intact. It was the blessing that was given to the other that made me stay: God loves them, and they are blessed in order to be a blessing for me. God blesses every life."

Selmanovic's book is filled with so many treasures, we regret that we have only been able to touch upon a few of them. He also writes cogently about hyphenated belonging, the kingdom of God, making God too small, laughter about ourselves, concern for strangers, city life, the oneness of all faiths, the gift of diversity, and much more. Every once and a while a book comes along that has us uttering exclamation marks of agreement out loud as we read. It's Really All About God is one of those treasures! 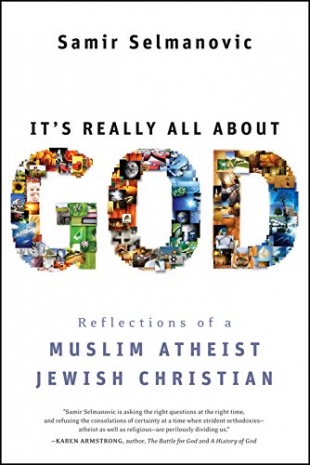