By Harvey Cox
A helpful and hopeful overview of church history and the positive dimensions of the Age of the Spirit we are now experiencing.

Harvey Cox is the Hollis Professor of Divinity emeritus at Harvard, where he has taught since 1965, both at Harvard Divinity School and in the Harvard Faculty of Arts and Sciences. He is the author of many books including The Secular City, published in 1965, which became an international bestseller and has sold over one million copies. His most recent work was When Jesus Came to Harvard: Making Moral Decisions Today. The Future of Faith is being released to coincide with Cox's retirement: it charts the three major periods in the history of Christianity and the shift that is taking place today away from religious beliefs and dogma to an emphasis on spirituality and social justice. The author can always be relied upon to deliver a thoughtful and sturdy theological interpretation and commentary on religion and the contemporary scene.

Faith, according to Cox, "starts with awe. It begins with a mixture of wonder and fear all human beings feel toward the mystery that envelops us. But awe becomes faith only as it ascribes some meaning to that mystery." This Christian theologian sees Jesus' faith as focused on the new order which he called "the kingdom of God." Cox says that it was "the heartbeat of his life, his constant concern and preoccupation."

The faith of the earliest Christians was oriented around this hope for the new world of shalom that Jesus personified. Their emphasis was on community rather than creeds or clergy. The first three centuries of Christianity demonstrated theological variety, spiritual fellowship, and an anti-imperial stance. All of that changed in what Cox calls "The Age of Belief" from the fourth to the twentieth century when faith became identified with creeds, orthodoxy and "correct doctrine." The imperialization of the church under Constantine also resulted in the glorification of bishops and widespread ecclesiastical corruption.

We are now living in "The Age of the Spirit," which began 50 years ago and is continuing now to shake the foundations of the previous era of hierarchical, patriarchal, and institutionalized religion. Cox gives examples of the last gasps of the old paradigm: an interview he did with Cardinal Joseph Ratzinger before he became Pope Benedict, and a look at how Protestants are struggling to move beyond fundamentalism. He has some sympathy for this embattled conservative movement since he once was part of it but also laments the fundamentalists' closemindedness and clinging to non-negotiable beliefs. Cox ponders the growing interfaith movement, the de-westernization of Christianity, liberation theology, and the tsunami of Pentecostalism.

The world's religions are all undergoing reforms and in the last chapter of this book, the author charts a few of them in Islam, Buddhism, and Judaism. Cox comments on the "emerging church movement" and its impact on mainline churches in America. In general, religious people are becoming "less dogmatic and more practical . . . more interested in ethical guidelines and spiritual disciplines than in doctrine." All these are positive signs that the future of faith is open, expansive, and hopeful. 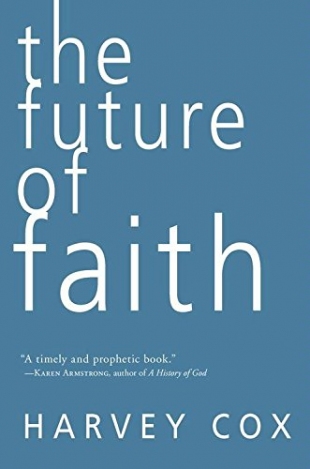