Worse Than War Genocide, Eliminationism, and the Ongoing Assault on Humanity

By Daniel Jonah Goldhagen
A moral work that brings the scourge of genocide into the light of day.

Until devoting himself full-time to writing, Daniel Jonah Goldhagen taught political science for many years at Harvard University. He is also the prize-winning author of the international number-one bestseller Hitler's Willing Executioners and A Moral Reckoning. In this monumental work, which is scheduled to be the basis of a major documentary film on PBS in 2010, he outlines the terrible causes and consequences of genocide and spells out what can be done about this horrific international scourge. Goldhagen believes that genocidal killing is worse than war and is appalled that more has not been done by the world community to stop its spread. It is found in Tibet, North Korea, the former Yugoslavia, Iraq, Rwanda, southern Sudan, the Democratic Republic of the Congo, and Darfur.

One would expect the discussion of mass killing to begin in with an account of what has taken place in one of those countries but instead Goldhagen starts boldly with "Harry Truman, the thirty-third president of the United States, was a mass murderer." He gave the orders to drop nuclear bombs on Hiroshima and Nagasaki with full knowledge that they would kill many Japanese civilians. Truman tried to justify his actions but in the end, he was responsible for the deaths of nearly 300,000 men, women, and children who had no direct bearing on any military operation. He and many other bloodthirsty leaders have set in motion the mass murder of more than 100 million people in the twentieth century.

The starting point for thinking about how to define and understand genocide is the Holocaust. Here ordinary Germans propelled by a deep-seated hatred of Jews and animated by Hitler's leadership, without the slightest shred of mercy, killed men, women, and children. This is an example of what Goldhagen calls "eliminationism," a form of politics which targets threatening groups or populations and seeks to get rid of them through mass incarceration, expulsion, and murder. Mass annihilations are political acts and justified on the grounds that the victims are sub-human, vermin, criminals, a dangerous threat to the community. In Rwanda, the Hutu attacked the Tutsi and with incrediblly intense barbarity killed about 800,000 men, women, and children in three months. The author examines a series of reasons why ordinary individuals participate in mass murder and concludes: "Personalized, conscious, and willful killing and brutality has been the norm in the vast majority of mass murders." The book includes testimonies by perpetrators from many different countries. Goldhagen then presents four ways this willingness to kill comes about.

The author laments the staggering indifference of political leaders and international agencies such as the United Nations to halt eliminationist campaigns. The principle of sovereignty gives dictators and others license to kill in attacks on their own people. Goldhagen suggests that the term "crimes against humanity" as a descriptor of genocide be replaced by the phrase "war against humanity." With great authority and clarity, the author outlines a three-pronged approach to stopping eliminationism and suggests placing bounties on the heads of genocide leaders.

Tragically, genocide is a problem that is not likely to go away. Goldhagen has done a masterful and moral job in bringing it out of the dark and into the light of day. 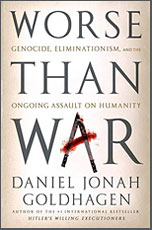