Listen to the Wind The Story of Dr. Greg and Three Cups of Tea

By Greg Mortenson, Susan L. Roth
The true story of an American who is bringing peace, hope, and new possibilities to the children of Pakistan and Afghanistan.

Listen to the Wind: The Story of Dr. Greg and Three Cups of Tea by Greg Mortenson and Susan L. Roth is the true story of how the village of Korphe in Pakistan got a school. Media reports about what's happening in Pakistan and neighboring Afghanistan focus on fighting and war, so it is important for American children to learn about other efforts that are bringing hope and new possibilities to their peers in those distant lands.

This beautifully designed picture book is illustrated by Susan Roth's collages; in the back there is a scrapbook with pictures of the real people who had this adventure. The story is told in the voice of Korphe's children. They describe how Greg Mortenson was cared for in their village after he got lost while mountain-climbing. When he asked what he could do to repay the villagers for their kindnesses, the town chief told him they needed a school. Mortenson returned with funds and supplies, and everyone in the community helped to build the school. Since then Mortenson has helped build many more schools and shown how the love of learning thrives everywhere in the world. 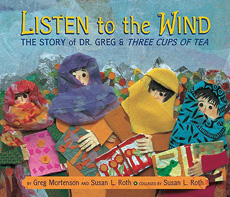