By Gail Silver
Shows how a little boy learns to befriend his anger and in so doing to transform it.

Young Anh lives with his grandfather and is building a tower with colored blocks. When called to dinner, he gets angry, pushes his grandfather away, and smashes the tower, sending the blocks flying. Ang bursts into tears and says hurtful things to his grandfather. The wise and patient old man tells him: "Go to your room and sit with your anger. I'll come in when you're calm and able to talk."

Anh runs to his room and cries. He doesn't know how to sit with his anger. Then a hairy red creature appears and tells the boy that he is the part of him that appears when things don't go his way, when he is scared or says mean things to people he loves. Anh and his anger dance around the room together and then sit together silently until he is calm. His grandfather is very happy that that his grandson has had the experience of taking good care of his anger.

This children's book by Gail Silver is illustrated by Christiane Kromer. It is based on the teachings of Thich Nhat Hanh, the Zen Buddhist teacher and peacemaker who has said of the book: "Anh's Anger reminds us that anger is a part of all of us and that mindful sitting and breathing can help transform it. Both adults and children will benefit from learning how to change an unhappy situation into a joyful one." 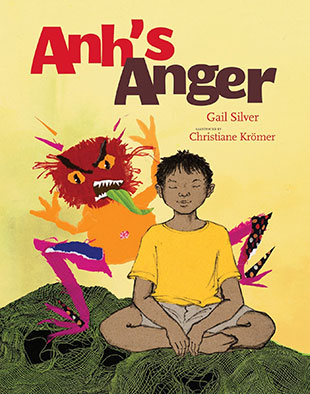