The New Jim Crow Mass Incarceration in the Age of Colorblindness

By Michelle Alexander
A scorching and incisive critique of the new caste system in America emanating from the War on Drugs and resulting in the mass imprisonment of nearly half of the nation's black men.

During the Jim Crow era in American history, African-Americans existed as second-class citizens in a segregated society. Now according to Michelle Alexander, a longtime civil rights advocate and currently a professor at Ohio State University's Moritz College of Law, nearly half of the nation's black men are in prison or have been labeled felons. As a result, they are subjected to discrimination in employment, housing, education, public benefits, and jury service. Or as Alexander states: "We have not ended racial caste in America; we have merely redesigned it."

The author presents a scary scenario of how this nightmare happened. It began with President Richard Nixon's "war on drugs," which became a national issue in 1985 under President Ronald Reagan even though illegal drug use was in decline at that time. Alexander points out that although people of all races use and peddle drugs at about the same rate, African-American males have been targeted by law enforcement officials. The result is that in less than 30 years, the number of people in prison for drug offenses has leaped from 41,000 to nearly 500,000 and many of these are for marijuana, not hard drugs, and most of them are black.

Alexander covers this abominable re-entrenchment of racial injustice starting with a look at the ways in which black men have usually been denied legal representation, offered plea bargains, and then often given heavy sentences. Even worse is the demonization which takes place after they are released from prison. It sometimes takes a miracle for an ex-con to be successfully reintegrated into society.

Other topics covered by Alexander include the impact of the "get tough on crime" policies on black men, the prospects of the Obama administration on civil rights advocacy, and a look at what our so-called "colorblind" society would be without affirmative action. The author concludes with her own progressive suggestions on what can be done to abolish this unjust replay of Jim Crow as a means of racial discrimination. 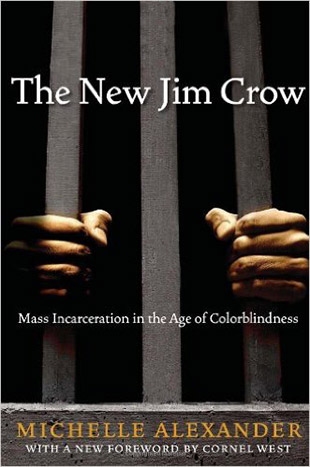