Autobiography of a Sadhu A Journey into Mystic India

Rampuri was the first foreigner to be initiated into the ancient Indian society of yogis and shamans known as the Renunciates of the Ten Names, or Sannyasis. He has been a Naga Baba since 1970. The sect was organized in the 5th century B.C., and they see themselves as the ultimate protectors of the Sanatan Dharma or what we call Hinduism.

The author grew up in Beverley Hills and kept hidden his yearning for secret knowledge, magic, and buried treasure. He drops out of high school and sets off on a quest for truth. On a voyage from Karachi, Pakistan, to India, he meets a young man named Cartouche who recommends that he get in touch with Hari Puri Baba, a guru who speaks English and knows how to read the world. Landing in India, the American feels like he is meeting a blood relative. He is fascinated by ascetics called sadhus and sannyasis, marginal characters who have dropped out of society and spend most of their time practicing various spiritual practices and disciplines.

In his first encounter with Hari Puri Baba, the author is astonished to learn that this holy man has been expecting him and has prepared a homecoming celebration for him. Hari Puri Baba has achieved mastery over a handful of intellectual and spiritual traditions including astrology and is considered by many of his peers as a genius in language and mantra. He renames the American Rampuri and promises him that he will teach him so that he may be initiated in the Tradition of Knowledge. It is a long and arduous process, and the author takes us through it step-by-step. Rampuri also shares his experiences at his first Kumbh Mela (a religious fair for Hindus that is held every 12 years), his efforts to discipline his body, his duties as keeper of the dhuni (fire), his troubles with some sadhu members who oppose him joining their order since he is not from India, his learning to give up attachments, and his pilgrimage to the source of the Ganges.

Rampuri seeks the ability to read the book of the world but there are too many obstacles in his way. He marvels at the way Hari Puri Baba talks the language of crows and doles out advice, cures, and blessings to the people who come to him. After his guru's death, Rampuri feels that he has possessed him. At the end of this compelling autobiography, the author says that he hopes readers will be edified and entertained by his quest for Truth and his adventures in the Extraordinary World. We are. 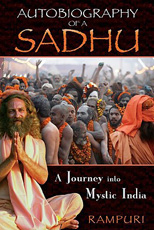