By Anne Villeneuve
How a cab driver is launched on an adventure that opens his heart.

"Another gray day," says Turpin, the taxi driver, on the opening page of this colorful adventure written and illustrated by Anne Villeneuve who lives in Quebec. The Red Scarf was honored with the TD Canadian Children's Literature Award. It has been written and designed for children from the ages of five to seven. Beyond the sentence quoted at the outset, this is a wordless drama told vividly through the illustrations.

Turpin, the cab driver, is like many of us who start the day with negative or gloomy thoughts but are surprised when we find ourselves caught up in an exciting adventure which takes us to places we have never been before. The cab driver's heart is in the right place. When a customer leaves behind a red scarf in the back seat of his car, he is determined to find the owner and return it to him.

Turpin thinks he sees the man at a circus and soon finds himself in a search where he encounters a lizard, a bear, a lion, a daredevil, a mysterious magician, and a monkey. His anticipated gray day turns into a momentous adventure. His mission of mercy opens his heart further in encounters with all these circus animals and human beings. 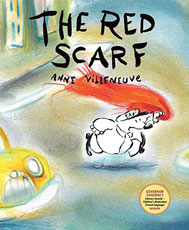