The Shadow Effect Illuminating the Hidden Power of Your True Self

Despite the wealth of spiritual and psychological resources available today, many persist in fearing and trying to escape from the shadow side of life and their own shadow. We recognize the dark side of ourselves when we cheat or steal, spread untruths about someone, keep secrets from the one we love, or project our hatred or indifference on to others. We repress these bad habits and repetitive behaviors and then feel even worse than before. In the introduction to this top-drawer book, bestselling author (The Dark Side of the Light Chasers and The Secret of the Shadow) Debbie Ford, who has done "Shadow Process" workshops for fifteen years, notes:

"I believe that the shadow is one of the greatest gifts available to us. Carl Jung called it a 'sparing partner'; it is the opponent within us that exposes our flaws and sharpens our skills. It is the teacher, the trainer, and the guide that supports us in uncovering our true magnificence. The shadow is not a problem to be solved or an enemy to be conquered but a fertile field to be cultivated."

One of the futile strategies in dealing with the shadow is that the "good me" takes aspects of the "bad me" and stuffs them out of sight. In the end, these stuffed behaviors usually surface with a rage. In his essay bestselling spiritual writer Deepak Chopra (The Third Jesus) presents a holistic approach to the shadow whereby we can move toward a vision of unity. He states that the split self is the most pernicious illusion. Instead of feeding the shadow by keeping secrets from ourselves and others, by harboring guilt and shame, or by needing someone to blame, we turn things around and stop projecting, detach and let go, give up self-judgment, and rebuild our emotional bodies. "Wholeness overcomes the shadow by absorbing it," Chopra writes. Wholeness grows in a field beyond good and evil, light and darkness:

"When you label yourself or anyone else as bad, wrong, inferior, unworthy, and so on, you are looking through a narrow lens. Expand your vision and you will be aware that everyone, however flawed, is complete and whole at the deepest level. . . . This is how a figure like Jesus or Buddha could have compassion for anyone. By seeing the wholeness behind the play of light and dark, they found nothing to blame. The same holds true along the spiritual path you follow."

Whereas Chopra sees unity as a solution to the shadow, Debbie Ford approaches it through the process of making peace with ourselves, others, and the world. She uses examples from her own life to illustrate the challenge of becoming intimate with your shadow and reclaiming all of yourself. She has experienced both sides "where you recognize your weaknesses and your strengths, where you can bask in your gifts, admit to your imperfections, and admire your greatness." She does a fine job describing the art of uncovering the shadow, the process of projection, the gifts of our shadow, and and how we can embrace our light shadow.

In "Only Light Can Cast Out Darkness," bestselling author Marianne Williamson (The Age of Miracles) begins with a clever assessment of how we begin our days by "downloading thought forms of fear from literally all over the world" via computers, newspapers, or television news. How much better it would be to reach for the light in meditation or to express gratitude as we start our day. Williamson observes: "The only way we can escape the shadow is to outgrow it, to drop it like the set of old and outworn clothing that it is, and become the spiritual giants we are intended to be." The key to becoming all we were meant to be is by cultivating love and forgiveness as paths of practice.

We highly recomment The Shadow Effect as a resource for your spiritual journey. It's unusual to get three different perspectives and prescriptions to a common challenge in one book. One of them is sure to speak to your condition. 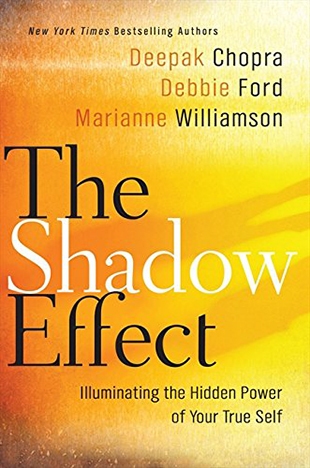