By Phil Cousineau
250 probes of fascinating, mysterious, and enthralling words.

Phil Cousineau is an award-winning writer, filmmaker, teacher, editor, independent scholar, travel leader, storyteller, and TV host. Currently the host of Link TV's "Global Spirit" television series, Cousineau has published 26 nonfiction books and has 15 scriptwriting credits to his name. Did we mention that he is also featured at Spirituality & Practice as one of the Living Spiritual Teachers?

In this spiffy little volume, Cousineau has gathered 250 words that have caught his fancy and tugged at his imagination. He has been a wordcatcher since growing up as a boy in Wayne, Michigan; at 15, he became a freelance writer and hasn't stopped writing since. Here he shares words from "Abracadabra" through "Zombification" that have aroused an "Aha!" when he first encountered them.

Some of our favorites are animateur, a teacher who infuses life into a subject which can include mentors, coaches and therapists; duende (Spanish) known as the blood surge, the vital force, the source of all impassioned art; fribble, to waste or kill time; murmur, to speak softly, one of the perennial favorite words on Top Ten Lists of the English language; and saunter, to walk without a care. Along the way, Cousineau spices things up with lively quotations that hit the mark in helping to explain the meaning of the words.

Reading this book, many will no doubt desire to follow the author's example and begin compiling their own fascinating words list. We were eager to read what Cousineau had discovered about a few of the words in our Alphabet of Spiritual Literacy including Beauty, Enthusiasm, and Esperance (French for Hope). 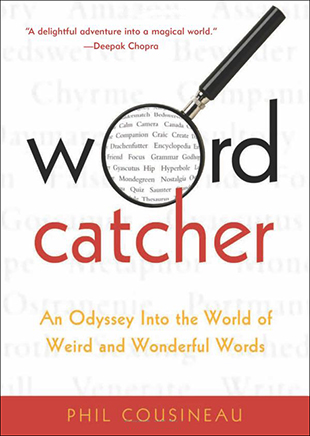