By Rodney Smith
An exploration of the many different dimensions of emptiness and awakening in the Buddhist tradition.

When he was leaving his home monastery, Wat Suan Mok in Thailand, for the last time in 1983, his teacher Ajahn Buddhadassa said to him: "Teach anatta and don't be afraid to shake people." Anatta refers to the idea that there is no permanently abiding self or soul; it's a concept that been downplayed in the West given the fascination with individualism, self-reliance, and the pursuit of pleasure. We are now seeing that the cowboy ethic which dominates the marketplace and is taught in schools has created havoc in the universe and is not conducive to the continuation of the species. Smith salutes the Wise View in Buddhism which offers an alternative to the self-centeredness and selfishness which reign in Western societies. The Eightfold Path is not about exerting our will or making things happen but relaxing, observing, and allowing what is already here to unfold on its own accord.

The sense-of-self divides the world into "us" versus "them." Meditation emphasizes another path — that of the interconnectedness of all things. In place of restlessness, it offers stillness. It helps us to see that "the optimum environment for awakening is where we are, and nothing needs to be added or subtracted to improve our opportunities."

Smith sheds further light on the process of awakening with his commentary on the Four R's of Wise Effort: relax, release, relinquish, and rejoin. The awakened person refuses to give in to what Trungpa Rinpoche called spiritual materialism, the ego's need to even control spiritual practice. Smith takes another route by emphasizing "directionless practice," where we drop the destination in order to be present in what is in, before, and around us.

Smith goes on to spell out other aspects of awakening. We loved his suggestion of the intention for the day as: "May my consciousness be open, and may the mystery reveal itself during the day." The author also has some provocative things to say about "forgeries of the mind" as it tries to take control by helping (rather than serving), niceness (rather than kindness), seriousness (rather than sincerity), and toleration (rather than inclusiveness). Smith concludes that the flowering of the heart is a sign of spiritual maturity. 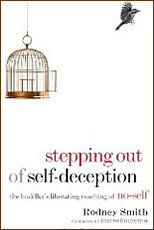