By Susan Reed
A salute to the exhilarations of human flight by three children in a hot-air balloon.

Humans have always had a strong urge to fly. A fascination with flight is recorded in the early Greek legends about Daedalus and Icarus. Leonardo da Vinci and others after him looked up to the birds for the secret of staying aloft in the air. The recent screen successes of Avatar and Up both had to do, in part, with their creative depictions of human flight. With bright illustrations by Rachel Oldfield, Up, Up, Up! is a children's picture book for kids aged four through eight, along with a special added feature — a CD with a folksy rendition of a song by Susan Reed. All young ones know that "trains are fun, race cars are fast, riding bikes down by the river is a blast" but none of them can hold a candle to the exhilarations of riding a hot-air balloon and "sailing with the clouds." Everything is put in perspective as three children glide along with the wind and climb higher. Best of all is a fresh respect for the good earth: "Jungles, mountains and countries. They're blending into just one color — and it's green!" 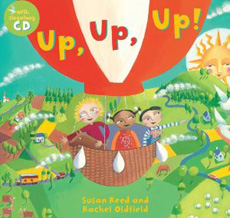