By Deborah Blumenthal
An affecting tale about love, loss, and the unspoken ties which bring dogs and human beings together.

"Having a good dog is the closest some of us will ever come to knowing the direct love of a mother, or God," Anne Lamott has written in Plan B: Further Thoughts on Faith. The ties binding us with dogs are deep and true as demonstrated in this top-drawer book for children ages four through eight. Cody notices a stray dog on the streets of the community where he lives. Some people call the dog Bones because he is so thin. He used to be the companion of an old man in a blue house who died. Half German shepherd and half something else, the dog has one brown eye and one blue eye.

Cody empathizes with the stray; one day he lies down in the grass and tries to feel what it would be like to be a dog without a home. Whenever possible, this wonderfully nurturing boy feeds Bones scraps of food. Bones reminds Cody how much he misses Teddy, the dog who died and was his best friend in the world. But his true feelings for the stray come out when he saves him from nearly being hit by a car. Bones eludes the dogcatcher and notices when the old blue house he used to live in is torn down. Writer Deborah Blumenthal and illustrator Adam Gustavson have fashioned an affecting tale that touches the heart with its messages about love, loss, and the unspoken ties which bring dogs and human beings together. 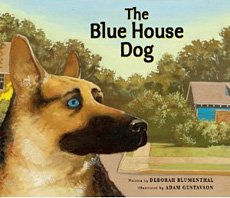