As explained by Susan Schnur, a Reconstructionist rabbi and author of this splendid story for children ages five through nine (along with Anna Schnur-Fishman, with illustrations by Alex Steele-Morgan), Tashlich is a Jewish ceremony that occurs on Rosh Hashanah where people walk to streams or lakes and shake out their pockets asking God for the forgiveness of their transgressions. In Tashlich at Turtle Rock, Annie leads her family through the woods to experience an amplification of this New Year ritual. At Turtle Rock they share one good thing they remember from the preceding year. At Billy Goat's Bridge, they find something they want to discard from last year: Annie's father decides to throw away saying bad things about people; her brother wants to get rid of being mad at a classmate; her mother vows to stop saying 'yes' when she really means 'no'; and Annie wants to throw away being so shy. Then they each take a piece of bread and throw it in the water as a way to let go of something they feel sorry about. At Gypsy Landing, they state promises they have made for the New Year. Annie's mother shares a prayer she's written for Tashlich:

"God, we have thrown out our mistakes and regrets,
And we have picked the best things from the year to keep with us.
Help us to start over.
Help us to remember our vows and promises,
And protect us this whole long year." 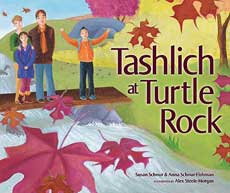