By Megan McKenna
An enlightening tribute to inspired and inspiring women around the globe who have contributed to the mending of the world.

Megan McKenna in an internationally known storyteller, theologian, speaker, spiritual writer, retreat leader, peace and justice activist, and world traveler. She has written more than 30 books and is featured on our site as a Living Spiritual Teacher.

It is said that "women hold up half the world," but McKenna is convinced that they hold up more than half. (We would agree.) And yet they are still viewed in many places as possessions, as barter, as sexual objects to be used, punished, or abused. McKenna would have us ponder the lives and the impact of extraordinary women (ancient and modern) who perform works of love and mercy, compassion and tenderness, rebellion, and resistance to injustice, as well as those whose creative writing stirs our souls. This book presents the good news of women who repair and transform the world with their lives, actions, and words.

McKenna summarizes some of the profound and prophetic books by Arundhati Roy who believes in a new world: "Not only is another world possible, she is on her way. On a quiet day, I can hear her breathing." Then there is Wangari Maathai of Kenya, who was awarded the Nobel Peace Prize for her environmentalism, her planting of trees, and her organizing of women. These two are examples of women who have not been afraid to prophetically speak truth to power in their countries. McKenna profiles Hanan Ashrawi, a Palestinian Christian; Lynn Gottlieb, an American Jewish rabbi; and Shirin Ebadi, an Iranian Muslim as three bridge builders in our time of deep polarization and hatred between religious and national factions. We were especially pleased to see the writer and environmentalist Terry Tempest Williams included in this book. She sees all life as holy and has observed that "Daily prayers are delivered on the lips of breaking waves, the whisperings of grasses, the shimmering of leaves." Then there are tributes to the two Dorothys — the Catholic Worker's Dorothy Day and Dorothy Mae Stang, a missionary sister of Notre Dame de Namur who was murdered for her advocacy of the Amazon rainforest and the poor Indigenous People in Brazil. The author notes that "both women suffered for crying out on behalf of others."

In addition to the other heroic women of spiritual fortitude covered in this enlightening work, McKenna also commends the stories of various Biblical women and their impact on others. And there is the added value of stories from various wisdom traditions — McKenna's trademark. Near the end of This Will Be Remembered of Her, the author sums up 15 priorities which these exemplars of faith, religion, and spirituality have championed. Then she poses the question to us:" How will you be remembered?" 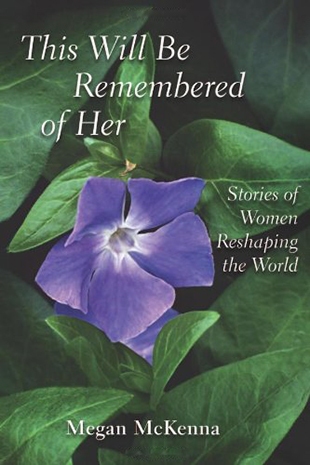