The editors of this anthology on the emerging directions of feminist Christianity are Mary Hunt, a Catholic feminist theologian, and Diann Neu, a feminist liturgist, minister, spiritual director, and psychotherapist. They are co-founders and co-directors of the Woman's Alliance for Theology, Ethics, and Ritual (WATER), a feminist educational center dedicated to creating and sustaining inclusive communities in society and religion, in Silver Spring, Maryland. Here you will find essays by 26 authors organized into five sections:

Hunt and Neu are optimistic about the future of feminist Christianity. Kwok Pui-lan offers a hopeful look at what is happening but seems to ignore the fact that those who are converting in the global South are conservatives who scorn those of LGBT persuasion, cling to the old-time chauvinism of Biblical texts, and are not likely to give women the chance to assume leadership roles as ministers. As we see it, not only is the battle for equality not over, it has taken several steps backward in the United States.

Rosemary Radford Ruether is much more on target with her critique of most theological seminaries which only offer "token inclusion of feminism in foundational courses."

Nancy Pineda-Madrid calls Christians to what she calls "a borderlands vision" where we learn to embrace others who are very different from ourselves. She is speaking of undocumented immigrants, but perhaps a more radical embrace would be us to embrace the richest people in America, who are the source of so much suffering, pain, poverty, and injustice.

Hunt and Neu have included essays on traditional women's issues within Christianity, such as combating sexual violence against women, working for peace, and creating interfaith celebrations. It is only in the last section of the book that mention is made of the formidable backlash against feminist Christians — a powerful opposition consisting of the entrenched Catholic hierarchy; the fundamentalists; the tide of new conservative Christians in Latin America, Africa, and Asia; and the bigotry against homosexuals which has split mainline Protestant denominations into squabbling enemies. It is not easy, the editors conclude, "to use the 'F word' without apology." 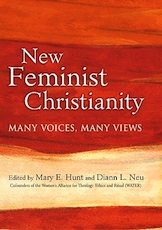