Kirtan! Chanting as a Spiritual Path

By Linda Johnsen, Maggie Jacobus
A helpful look at the spiritual practice of kirtan through profiles and interviews with eight of its most popular and accomplished Western singers and musicians.

Kirtan is a spiritual practice that is widespread in India. The word means chanting or singing in praise of the Divine. Kirtan has a healing effect on the body and mind as the Names of God are repeatedly chanted. Sacred sound fills the room and draws the singers and the musicians together into a tightly knit community. As Linda Johnsen, a contributing editor for Yoga International and other publications, and Maggie Jacobus, a founding board member of the International Kirtan Foundation, point out in their introduction:

"The sacred sounds begin to act as spam blockers for the soul, replacing the often trite or petty thoughts that may clutter the field of your awareness. In this way the practice of kirtan really does become a yogic path, reorienting you toward a more deeply spiritual life."

Johnsen and Jacobus present profiles and interviews with eight of the most respected kirtan wallahs (singers) in the Western world today. The first is Krishna Das whose name is synonymous with this devotional music. He talks about how many elders in India spend the last stages of their life chanting in the temples. Deva Premal has introduced sacred chant to millions of people around the world and she shares some of her experiences with kirtan along with her partner Miten. Bhagavan Das recorded one of the first kirtan tapes in the U.S. in 1974. He calls this music a kind of "Sing Along Club." Snatam Kaur describes the importance of singing God's praises in the Sikh tradition. Ragani, one of the cofounders of the International Kirtan Foundation which promotes sacred chant around the world, reveals some of the goals of this organization. Wah! demonstrates by her career that kirtan has been adapted to many different musical styles. Also interviewed are Jai Uttal and David Stringer.

Here are some of the benefits of singing kirtan as summed up in this helpful resource:


• You do not have to be a seasoned singer, a devotee of Ram or Krishna, or an expert in Sanskrit to chant in a group.
• Kirtan stirs up the energy within your own body and activates the cells.
• Kirtan helps open people's hearts, releasing a flood of emotions.
• You may adapt kirtan to your own spiritual path.
• When the Names of God are chanted, we are united with others who have gone before us and those who will follow us.
• When the chanting is done, observe a period of silence. 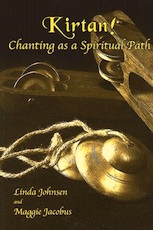