How do terrorist attacks alter the playing field of war and define measures needed to protect citizens? Have the justifications for war changed with the threat of nuclear weapons? Is torture acceptable? What are the moral implications of using stealth bombers, drones, and long-range missiles, which make it easier to kill people at a distance? These are some of the critical questions raised in this paperback edited by Elliot Dorff and Danya Ruttenberg.

In the fifth volume of the Jewish Choices, Jewish Voices series, Jews from various perspectives and vocations explore the basic ethical issues surrounding war and national security. The paperback is organized into sections on National Security, Justifications for War, The Conduct of War, and National Policies Concerning War. Each section has a case study and traditional and contemporary sources on the subject.

In the face of rampant and continuing warfare around the globe, it is imperative that contemporary prophets be heeded — since the ancient sources have so little to say about the complexities of our modern times. Be sure to check out the interviews with Noam Chomsky and Michael Walzer. 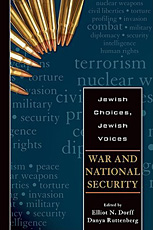