By Larry Snyder
An explanation of how the face of poverty is changing and what the Christian community should do about it.

Larry Snyder is president of Catholic Charities USA, the national office of more than 1,700 local agencies and institutions nationwide that provide help and create hope for more than 9 million people a year, regardless of their religious, social, or economic backgrounds. Right now in America, almost 40 million are poor with about 15 million without jobs. The face of poverty has changed drastically and is expanding into nearly all segments of society. It is now a mainstream experience which more than half of Americans will have to endure for a year at some point in their adult lifetimes.

Snyder reports that Catholic Charities are seeing more working families, single parents, and seniors seeking such basic services as housing, shelter, and food. He offers his thoughts on government aid, loans to the poor, and innovative jobs from the nonprofit sector. Snyder concludes: "We must see clearly, that the eradication of poverty is a personal, moral mandate for each of us." That is why he points to human dignity as the heart of Catholic social teaching and calls upon men and women of faith to rise to the challenge of cutting poverty in half by 2020. Be sure to check out the appendix of the book for 147 ideas to explore in an effort to reduce poverty in America. 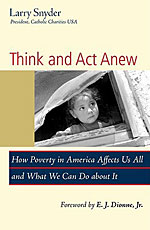