Zero Kisses for Me

By Manuela Monari
A perky story about a little boy who declares his independence in the morning but still needs demonstrations of his mother's love at night.

"Mama, I don't want a goodnight kiss tonight. I'm too big for kisses now," says a little boy who wants to see himself as more grown-up. He spells out some of the reasons why he's fed up with these expressions of affection which take place when he goes out in the rain or when he's called honeybunch or when she tells him he's sweet as candy. In addition, the little boy says, he is tired of all the smooching he gets from the whole family. "No more mush!" he states vehemently. But he sings a different song after going to bed and being frightened by the dark. Then the little boy is calmed and rescued from fear by his mother's sweet kisses.

This appealing picture book is designed for children from two through six years old. Writer Manuela Monari has done a good job catching the independent streak in children who still need reassurance and demonstrations of parental love. The perky illustrations by Virginie Soumagnac add verve to the endearing story. 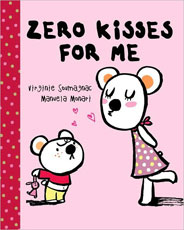