By Bradford Keeney
A wild, playful, and original spiritual adventure set in Africa where some elders pass on their ancient spirituality which tracks God.

Bradford Keeney is an internationally respected scholar, lecturer, and therapist. He is the author of more than 31 books including Shaking Medicine. Keeney spent ten years living and studying with the Kalahari Bushmen of southern Africa, the oldest living culture on Earth and the practitioners of an original form of spirituality that predates all the world's religions by thousands of years. A small number of elders hold this ancient wisdom which tracks God through the embrace of wild laughter, syncopated rhythm, and ecstatic love. When Keeney met the Kalahari Bushmen in 1992 they told him: "Welcome to your home. We have been waiting for you." Through dreams, he is seen by them as a great healer and large spirit. They believe that he shares with them "a rope to God" that takes each of us to a greater understanding and peace.

In this book, Keeney describes being called to Africa by the elders to discover the twelve original mysteries; he is charged with sharing them with the rest of the world. The First Mystery has to do with giving your body "permission to move itself as it wishes without interference" of any kind. The core of this practice is to spend 20 minutes in movements that blend and change at random. Keeney notes that your body has been waiting for your mind to step away for years.

The Second Mystery has to do with shaking your booty for God who wants to play with us and to keep us super-charged with divine energy. Keeney advises us to ecstatically shake to make ourselves clear. Shake to become open to spirit. Other Mysteries involve an enrichment of emotional experiences, a surplus of sacred knowledge, powerful healing, spontaneous rejuvenation, and more.

Keeney reveals a startling difference between our Western views of spirituality and those of the Kalahari Bushmen:

"Kalahari spirituality suggests that it is distracting and inaccurate to depict yourself as a person who should try to spiritually evolve. If you are in tune, life simply plays beautiful music on you. It has nothing to do with your instrument being more developed; it is all about tuning. The key to embracing vital living is to know how to tune your life. And stay tuned."

Another aspect of Kalahari spirituality is the high place given humor. Check out the movie The Gods Must Be Crazy to see what that means. The elders encourage people to embrace their inner fool and to develop their own kind of craziness. Keeney writes that the greatest secret of the universe is that music is our link to God. Without a song there is no contact with our ancestors or to the divine.

Keeney's spiritual adventures contain many mystical moments which go beyond words. All we can do is accept the grace and the miracles of healing which are available to all. 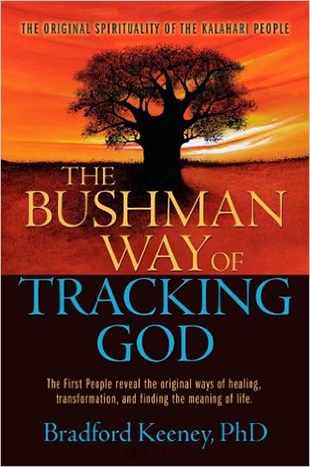