By DK Publishing
An innovative, accessible, and snappy overview of 2,500 years of philosophy.

Philosophy has been around for a very long time. The time frame for this innovative, accessible, and engaging overview of the subject is 624 B.C to 2008. Philosophers have always asked the right questions and provided us with plenty of food for thought. In the long sweep of history and culture, we see men and women assessing the meaning of life, the origin of the universe, the nature of the world around us, the significance of human consciousness, the value of reason, the uses of logic and language, the ideal of the good life, the rights and responsibilities of citizens in society, and much more.

One of the best learning devices in The Philosophy Book is the "Idea Openers," which introduce a particular philosophy with a quotation from the idea's major proponent. Here are a few examples:

• "Truth resides in the world around us."
— Aristotle

• "He has the most who is most content with the
least."
— Diogenes of Sinope

• "Philosophy and religion are not incompatible."
— Averroes

• "Act as if what you do makes a difference."
— William James

• "It is only suffering that makes us persons."
— Miguel de Unamuno

• "The fundamental sense of freedom is freedom from chains."
— Isaiah Berlin

• "In suffering, the animals are our equals."
— Peter Singer

This innovative, accessible, and snappy guide to more than 2,500 years of thought covers more than 100 big ideas with added value provided by biography boxes, graphics and charts, mind maps, follow-on spreads, a directory, and a glossary. Here you will find Francis Bacon's exploration of knowledge as power, Thomas Hobbes on man as a machine, Jean-Jacques Rousseau's social contract, Mary Wollstonecraft's idea that mind has no gender, Hannah Arendt's theory of the banality of evil, Jean-Paul Sartre's existentialism, and Frantz Fanon on the black man's destiny. 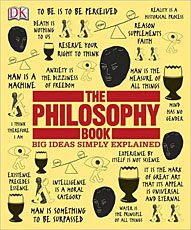