By Karen Rostoker-Gruber
Play seen as a problem solver and an antidote to bullying.

Fudge and Einstein are two ferrets living in comfort in their cage when the lady of the house introduces them to Marvel, a female cat. She thinks they are rats and zeroes in on ways to get to them. They are unable to convince her that she has made a mistake about who they are. After a standoff in which they order Marvel to stop bullying them, the ferrets come up with another plan. They will disarm the cat's yearning to eat them with something equally appealing: they will all play together.

Karen Rostoker-Gruber is the author of this sprightly children's book aimed at children aged four through eight. Paul Ratz de Tagyos is the illustrator of the entertaining and up-close skirmishes between the cat and the two ferrets. Play is seen here as a potential problem solver and as a resource that can stop bullying. 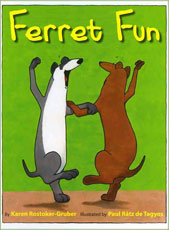