By David Hyde Costello
A clever story for children about how a little pig surprises himself by building on the right stuff he finds within himself.

Imagine being the littlest and the last child in the family. You'd have to work twice as hard as anyone else to be accepted. You'd have to run just to keep up with the speedy and energetic older ones. And there would be plenty of times when you would feel left out of things — almost as if you didn't matter at all.

These are some of the experiences of little pig who on a visit to his grandfather's house with his older brothers and sisters is thrilled when they haul out of storage a group of instruments from yesteryear. While the others all find instruments suitable for them, little pig can't find one small enough to use. He tries a drum, a trombone, a trumpet, and a tuba. None of them work so all he can do is sit and watch his brothers and sisters march around the house playing. It sounds chaotic and seems as if each sibling sees him or herself as a soloist rather than becoming one band. Little Pig decides to take over as the leader of the family marching band.

This whimsical children's book has been written and illustrated by David Hyde Costello who knows how to make us cheer for the underdog or, in this case, the little pig who finds within himself the right stuff to become a leader. The book is for children 4 through 7 years of age. 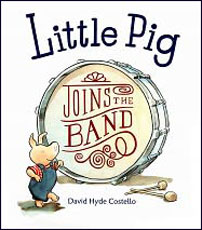