When I Woke Up I Was A Hippopotamus

By Tom MacRae
A clever and entertaining children's book about the emotional mood swings of a little boy during one day.

A very clever little boy wakes up in the morning as a hippopotamus; when his mother tells him to get out of bed, he just rolls over and says: "Hippos in their sludge don't get up in the morning, and so I didn't budge." Dominated by his emotional mood swings at different parts of the day he is a Robot (the words of others don't compute), a Statue (couldn't move a muscle or blink an eye), a Monkey (telling his teacher off), a Monster at playtime (the girls all scream), a Rocket Ship (zooming out of orbit), and a Giant (making lots of noise in his room). His parents have their own trick and are transformed into dragons. They want him to stop pretending and to be a good little boy. And so his mood changes once again and they have a pleasant evening. Then the little boy slides into bed and his dreams are really wild.

Writer Tom MacRae and illustrator Ross Collins have put their talents together in this entertaining children's tale about shifting emotions throughout a single day. Instead of giving in to this rollercoaster ride, we can think of others — like the little boy eventually does — with his father and mother. The author has come up with some interesting images for various emotions and that makes this children's story even more fetching! 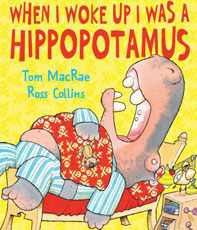