God of Love A Guide to the Heart of Judaism, Christianity and Islam

By Mirabai Starr
A passionate and poetic account of the interspirituality of Judaism, Christianity, and Islam.

Mirabai Starr has done some remarkable translations of the writings of St. John of the Cross and St. Teresa of Avila. As a teenager she lived at the Lama Foundation, an intentional spiritual community dedicated to the exploration of the world's religions. Starr has been an adjunct professor of Philosophy and World Religions at the University of New Mexico-Taos since 1993.

In the introduction, Starr shares a bit of her spiritual journey and her mission to help build bridges between the world's faiths. She is a living icon of Wayne Teasdale's understanding of interspirituality, which honors diversity and cherishes unity. At one point, Starr describes herself as a Jew with ecstatic Sufi inclinations, a lifelong devotion to a Hindu guru, a committed Buddhist meditation practice, and author of a dozen books on Christian mysticism.

God of Love celebrates the mystical and social justice teachings of the world's three monotheistic traditions: Judaism, Christianity, and Islam. This is a passionate defense of the hidden and often unacknowledged treasures of these complex and volatile paths.

Starr explains the common wisdom streams of Judaism, Christianity, and Islam with assessments of the Oneness of God, the stewardship of the earth, the divine summons of reluctant prophets, the yearning for the Beloved, faith and wonder, welcoming the stranger, sacred service through compassionate action, and forgiveness and reconciliation. We were pleasantly surprised to find fresh slants on Abraham, Brother Francis (of Assisi) and Sister Hildegard (of Bingen), Jewish concentration camp victim Etty Hillesum, and the Prophet Muhammad's contemplative side.

Starr ends with a rounded treatment of the feminine face of God in all three religions and some very thought-provoking suggestions for activating your own interspiritual quest, such as inventing your own prayers, singing, and reaching out to the Divine Feminine. 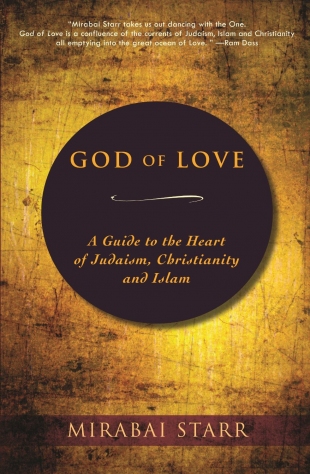