By Marsha Wilson Thall
A boy's quest to discover what kind of a gift his grandfather has given him.

A young boy heads to his grandfather's farm for a weekend visit. He is thrilled to leave home for an adventure in a different place. His interest in this particular visit is heightened when his grandfather tells him that a secret is waiting for him. After savoring roasted marshmallows on a stick under the stars, the boy wonders what lies in store for him. He asks his grandmother what the secret is and she responds, "A secret is for keeping."

The boy goes on a quest and looks in the barn and in the cornfield. Another day passes and he goes outside as moonlight floods the farm yard. Something in the loft is making noises. He looks and at midnight discovers with delight his grandfathers and now his secret.

This gratifying children's picture book is written by Marsha Wilson Thall with illustrations by Heather M. Solomon. It does a fine job conveying the alluring nature of secrets and the close ties of affection between grandparents and grandchildren. 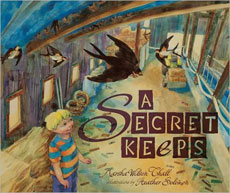