When Women Were Birds Fifty-Four Variations on Voice

In Refuge: An Unnatural History of Family and Place (1992) Terry Tempest Williams gave the world a beautiful, brooding, and hopeful memoir about the enduring links between family, change, loss, and the environment. It focused on a seven-year period during which she was besieged by forces of death and destruction. Williams revealed herself to be a caring and compassionate woman as she helped her Mormon mother and grandmother through death. She turned to nature and to birds for strength and renewal. On this website, we have a Values & Visions Book Guide to Refuge and Terry Tempest Williams is one of our Living Spiritual Teachers. She is the author of 14 books and divides her time between Castle Valley, Utah, and Moose, Wyoming.

Just before she died of ovarian cancer at the age of 54, her mother told Terry Tempest Williams that she was leaving her all of her journals but that she didn't want her to look at them until after she was gone. This is the dramatic beginning of When Women Were Birds: Fifty-Four Variations on Voice which can be seen as a sequel to Refuge. According to Mormon tradition, a woman is required to do two things: bear children and keep a journal. With high expectations, Williams opens all the journals her mother had bought over the years and discovers them all to be blank.

The author, now 54 herself, is baffled and hurt: "My Mother's Journals are paper tombstones." She realizes that although she was close to her mother and praised by her, parts of her mother's history and experiences will now remain hidden, a secret never to be revealed. She begins a writing quest to catch intimations of her mother and to measure her own life in the context of the past and the intrusions of the present.

Williams is hobbled by a speech impediment in the fourth grade but overcomes it through the kind ministrations of a teacher. Although she is still frightened when speaking in public, she is now able to take a deep breath, sidestep her fear, and begin speaking "from the place where beauty and bravery meet — within the chambers of a quivering heart." We remember hearing Williams give a lecture at the New York Public Library and what impressed us most was our sense that all she did and said clearly came from the heart.

Whereas her mother flew away like a bird in the face of filling up her journals with words, her daughter admits: "I cannot think without a pen in hand. If I don't write it down, it doesn't exist." In this light, Williams sees her mother's empty journals as "an interrogation" asking her questions she doesn't want to answer.

We are treated to hints about Williams's husband of four decades and his love of the wilderness. We learn about her experiences as a teacher in a restrictive Mormon school where she is criticized for using the word "biology." She opens up even more with revelations about nudity, having her life saved by reading, seeing the world beginning with "yes," her respect for the African tree lover and activist Wangari Maathai, her scary encounter with a mad man, her act of civil disobedience at the Nevada Nuclear Test Site, a serious injury caused by a falcon, and her contributions to the 1996 legislation protecting nearly two million acres of wilderness in Utah.

The quest to find her own values and visions leads Williams to the following insight: "Mother gave me my voice by withholding hers, both in life and in death." We are the fortunate beneficiaries of this unusual legacy. We are grateful for Williams's ecological actions, her exquisitely written tributes of the deserts and wilderness places, her love of birds and other creatures, and her extraordinary writings about the beauties and the bounties of the natural world. Last but not least, is the good heart (a phrase used in Rwanda) of Terry Tempest Williams which is evident on every page of this astonishing book! 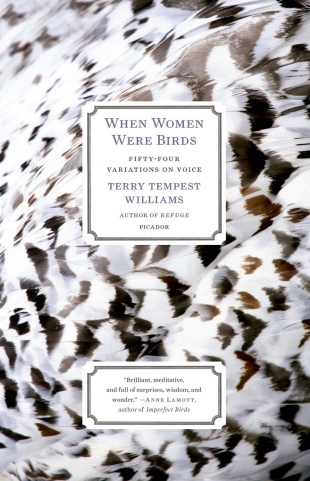