Spiritual Marketplace Baby Boomers and the Remaking of American Religion

By Wade Clark Roof
Charts the wide-ranging search for meaning by the largest generational cohort in U.S. history.

"Religion in the United States is like a brilliantly colored kaleidoscope ever taking on new configurations of blended hues," writes Wade Clark Roof, the J. F. Rowny Professor of Religion and Society at the University of California, Santa Barbara, and author of A Generation of Seekers (1993). In this thought-provoking map of the contemporary religious scene, he returns to interview members of the post-World War II generation who are now in midlife. Melding a rich blend of personal stories with statistics, Roof charts the wide-ranging search for meaning by the largest generational cohort in U.S. history.

The "quest culture" created by the Baby Boomers grows out of their yearning for a wholeness of body, mind, and spirit; the impact of the media; and globalization. Although some of these individuals have returned to churches and synagogues, most remain unaffiliated with religious institutions. A broad and eclectic group of suppliers has arisen to serve their needs and interests: self-help groups, retreat centers, spiritual seminars, New Age workshops, meditation cassettes and videos, and an unending stream of books about spirituality and the world's religions.

Roof charts five subcultures within the Baby Boom generation — dogmatists, born-again Christians, mainstream believers, metaphysical believers and seekers, and secularists. He then presents an overview of the lifestyles, family patterns, and moral values for each of these subcultures. Spiritual Marketplace is the definitive survey of the transformations of American religious life and its present-day manifestations. 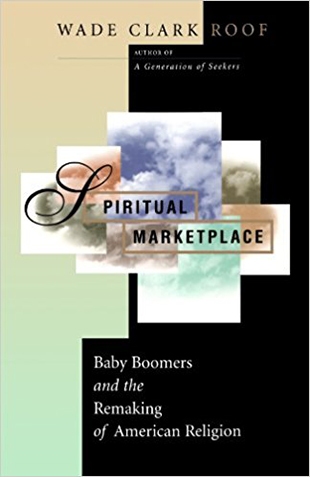