By Philip Toshio Sudo
A good case for the transcendent communion that can take place in the act of making love.

The way of zen is to give all to the moment, no matter what we are doing. According to this tradition, we are connected to sex by "the red thread" of blood at birth. Although certain elements of Buddhism stress celibacy and emphasize abstinence, Philip Toshio Sudo (Zen Computer) is convinced that sex can enrich the experience of enlightenment.

One of the most honored zen masters in history, Ikkyu Sojun (1394-1481), had little respect for a paint-by-numbers approach to zen. In one of the many poems of his quoted in this work, he says: "The autumn breeze of a single night of love is better than a hundred thousand years of sterile sitting meditation." For him, "the Way of Desire" served as his koan.

Sudo has divided this celebration of eros, desire, sexual practice, and lovemaking into sections on "the seven ways of the mind," "the seven ways of the body," and "the seven ways of the spirit." The text is spiced up with examples of the Japanese art form known as "shonga" or "spring pictures" that were used as illustrations for love novels, posters for pleasure quarters, and instruction manuals for young wives and married couples from the seventeenth through the nineteenth centuries.

"Great sex," Sudo writes, "is sheer abandonment, letting go of inhibition and self-consciousness and giving in to the heat of the moment." The author shows how zen salutes the aphrodisiac of fantasy, conquering haste in the bedroom, making the most of improvisation and the least of perfection, engaging all the senses, and giving for the sheer pleasure of giving. Zen Sex by Philip Toshio Sudo makes a good case for the transcendent communion that can take place in the act of making love. 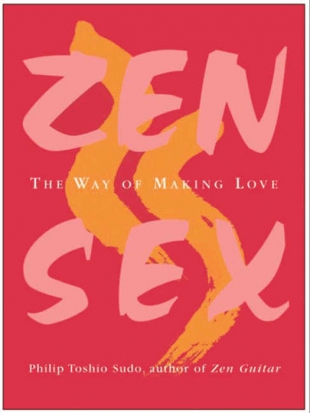