My Life in Jewish Renewal A Memoir

By Edward Hoffman, Zalman M. Schachter-Shalomi
A wild, robust, and creative memoir of a pioneer in interspirituality and one of the founders of Jewish Renewal.

Zalman Schachter-Shalomi has written a robust and creative memoir with Edward Hoffman, author of The Kabbalah Reader and other books. Known by friends and students as "Reb Zalman," he has left his mark on Judaism by founding the Jewish Renewal movement (it has ordained more than 100 Jewish Renewal rabbis) and spearheading the adventure of interspirituality with his teaching, books, and mentoring.

Reb Zalman was born in Poland and educated in Austria where he spent most of his childhood. His beloved father insisted that his son attend both a Zionist high school and a traditional Jewish yeshiva. In 1938, Nazi oppression sent the family to Belgium, France, and elsewhere until they landed in New York in 1941. Six years later he was ordained by Central Lubavitch Yeshiva.

This book also tracks this open-minded and open-hearted rabbi's fascination with pastoral psychology, Sufism, conscious aging, and a variety of spiritual experiences. Reb Zalman and Hoffman share vignettes of his encounters with Timothy Leary, Thomas Merton, Abraham Maslow, His Holiness the Dalai Lama, and Abraham Joshua Heschel. In the conclusion of an essay on Thomas Merton, the author writes:

"In keeping with Teilhard de Chardin's concept of Noosphere, I believe that we can all get together and recognize that just as the lungs, the brain, or the liver cannot function as the entire human body, and every vital organ is needed, so too is every religion a vital spiritual organ of our planet. Once we understand this notion, we can all work together for the divinization of the planet, converging toward Teilhard's 'Omega Point.' And the means for that forward movement we can find in Merton's spiritual direction. How so? I am referring to prayer, openness to other religious traditions and to poetry, and letting your own tradition work through you."

Reb Zalman down through all of the years has remained faithful to the Hasidic ideals of experience and to everyday spirituality. But at the same time, he has served as a scout for all of us, leading us into new territory and exposing us to fresh teachings and wisdom coming from many different places. Only an incredibly busy and productive seer could end his memoir with a section on "My Unfulfilled Projects." Reb Zalman has given all he has in service of others and we are the richer and wiser for it. 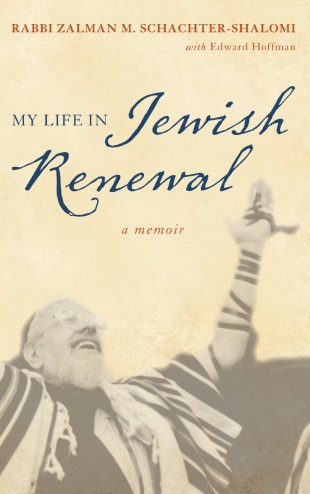