By Swami Vivekananda, Victor M. Parachin
A top-notch collection of the essential writings of the Hindu spiritual teacher who introduced yoga to the West.

Swami Vivekananda (1863-1902) was a young Hindu monk whose presence and speech at the World's Parliament of Religions in Chicago in 1893 enthralled those attending. He was lauded for his visionary and lyrical embrace of the validity and unity of all religions. He went on to introduce Hinduism and the practices and principles of yoga to the West. His ideals of a universal religion and the worship of the living God still reverberate in the hearts and minds of all those who espouse the spiritual practice of hospitality in a pluralistic world.

In this volume in Orbis Books' Modern Spiritual Masters Series, Victor Parachin has selected excerpts from the writings of Swami Vivekananda and written the introduction. Parachin is an ordained minister and yoga and meditation instructor. He is the author of Eastern Wisdom for Western Minds and Eleven Modern Mystics and the Secrets of a Happy, Holy Life. He is also co-founder of Yoga Spirit Academy in Tulsa, Oklahoma.

In the preface, Parachin offers ten quotations by Swami Vivekananda to whet our interest in this extraordinary spiritual teacher. Here is the one we liked best:

"Take up one idea. Make that one idea your life — think of it, dream of it, live on that idea. Let the brain, muscles, nerves, every part of your body, be full of that idea, and just leave every other idea alone. This is the way to success, that is the way great spiritual giants are produced."

Vivekananda studied for two years under the guidance and spiritual direction of Sri Ramakrishna and when this pathfinding teacher died, he took over as the leader of his disciples. After years as a wandering monk, Vivekananda visited Vedic centers in India and later established centers in New York and California.

Although he died at the early age of 39, Swami Vivekananda popularized Vedic terms and concepts such as karma, meditation, chakra, reincarnation, self-realization, enlightenment, and guru. Parachin sees him as "the towering figure from the East for helping the West develop a great interfaith appreciation and religious tolerance."

This paperback is divided into sections which put on display Vivekananda's eclectic and pioneering spirituality:

Parachin concludes with an inventive piece "How to Be Like Swami Vivekananda" (see the excerpt). 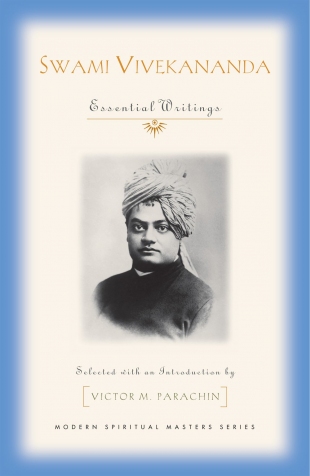