By Michael Babcock
A stunningly beautiful volume of shamanic art and much more.

This stunningly beautiful retrospective of the art of Susan Seddon Boulet (1941 - 1997) contains more than 200 reproductions of her paintings including some never published before. Born in Brazil, she was raised by her father on a cattle ranch where she was enchanted with the moon and the animals. When she showed a talent for drawing, her father sent her to school in Switzerland. She moved to San Francisco in 1967, married and had a son. From the 1970s until her death from cancer, Boulet created 2,000 pieces of art.

Michael Babcock, a longtime friend and lover of her art, hits the nail on the head when he writes: "Susan's images, even seen for the first time, can seem hauntingly familiar and known. The unconscious speaks in images, so her images speak directly to that part of the psyche. . . . Her pictures can activate a reverie much like dreaming or active imagination, a drifting along with the image to see where it goes."

This is especially true of Boulet's shamanic paintings that feature the intertwined figures of humans and animals. No other artist has ever given us such a clear passage into this mysterious world. Boulet allowed her inspiration and enthusiasm for life to serve as catalysts for her creativity. Her art was fueled by many influences, including Jungian psychology, the workshops of Angeles Arrien, the Tarot, the I Ching, and the writings of Laurens van der Post, Ursula Le Guin, and Anais Nin.

Babcock aptly describes her style as "polished looking pieces with jewel-like colors and precise, intricate detailing." Whether depicting unicorns, mimes, mermaids, jesters, or goddesses, Boulet enables us to tap into the undercurrent of awe and wonder that comes through her sensitivity to the interpenetration of the seen and the unseen worlds. Perhaps the last word should go to her friend and spiritual teacher Angeles Arrien: "Her genius was to invite others to see far beyond the obvious and to delight in discovery and entering yet another enchanting and mysterious place." 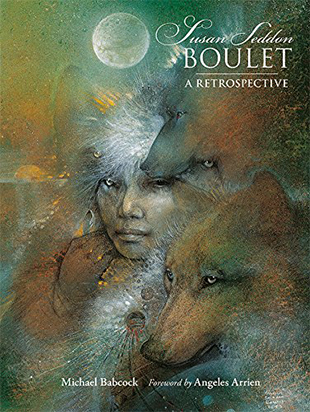